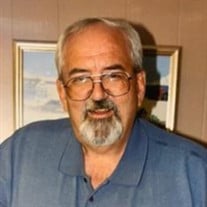 Alfred Leonard Yough, Jr Born October 21, 1951 “Butch” went home to our Father on Sunday, November 14, 2021 leaving behind his wife of 50 years, Bonnie (Stull) Yough, his sons; Todd (Melissa) Yough of Spring, Nathan (Christina) Yough of Huntsville and Cole Yough of Austin. He was an active member of the First Presbyterian Church of Tomball and a member in good standing of the Sunset Lodge No. 438 of Louisiana. He was a 32nd Degree Mason. Butch also was a Retired Naval Veteran having served his country 23 years and received letters of commendation from every duty station he occupied. He spent 4 months in Vietnam delivering oxygen to Danang during the war. In civilian life he had obtained the highest office an adult leader can receive in Scouting, the Wood Badge and spent many years mentoring boys in scouting. He also coached every sport his sons were involved in. In 1998 he ventured out and started his own company with the knowledge he obtained in the Navy. He named it Tonatco Cryogenics after his three sons saying they were the three best things to happen to him. Along with his family it was his pride and joy, mainly because it gave him the opportunity to see most of his family every day. He was so proud of his sons but delighted in being “Grandad” to Jake (Hailey), Julia (Shawn), McKenzie, Tanner and Tripp. He also earned the name “Great Grandad” to Oliver, Lilah, Amelia, Avery and Emma. They all filled his world with joy and he could be seen at any event they were involved in. Back in Western Pa. he is survived by his brother James (Betty) Yough, sister-in-law Barb Thrower, brothers-in-law, Robert Stull and Barry Joe Stull of Portland, Or. and numerous Aunts, Uncles, nieces, nephews and cousins. Going before him are his Mother and Father, Evelyn (Foust) Yough and Alfred L. Yough Sr, his brother, John (Jack) Yough, sister-in-law Charlotte and one nephew, David Yough. A memorial service will be held at Fist Presbyterian Church in Tomball, on January 22nd of 2022 at 2:00 pm

The family of Alfred Yough created this Life Tributes page to make it easy to share your memories.

Send flowers to the Yough family.