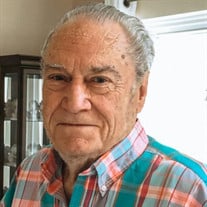 Allen was born November 25th, 1929 in Houston, TX. He graduated to Heaven on October 5th, 2020 at the age of 90! He accepted Jesus Christ as Lord & Savior on February 2nd, 1941. He entered Texas A&M College in 1946 at the age of 16. He married Geraldine Lane on June 3rd 1949 and they were married for 66 years. He was a member of Memorial Baptist Church for 83 years. He worked for Houston Lighting & Power for 40 years where enjoyed the challenge of problem solving and creating ideas that he freely shared. Allen was preceded in death by his loving wife, Geraldine, on September 4th, 2015, by his father, Allen Burch Bradshaw on August 18th, 1972, his mother, Gladys on February 13th, 2005, his sister, Manetta Pilkenton on July 4th, 2016, his brother, Kenneth Bradshaw on December 23rd, 2017, and his son-in-law Larry Velkovich on November 27th, 2017. He is survived by his daughters Judy Gale Bosworth and husband Robert, Joan Elaine Wolfe and husband David, Jan Marie Velkovich, and his son James Allen Bradshaw and wife Kay. He is survived by one brother, Donald Bradshaw. He was “Grandpa/Paw Paw” to 15 grandchildren and 24 great-grandchildren who were blessed by his wit, wisdom and generosity. His favorite songs were “I’d Rather Have Jesus” and “In the Garden”. His advice is: “Accept Jesus Christ, Study, Work and Give. You cannot out give God. Do not forget – you are also dying. Please read John 3:16.” Viewing will be Thursday, October 15th from 5 to 8 pm at Addison Funeral Home, with the funeral service Friday, October 16th at 10 am at Memorial Baptist Church, 22333 Kuykendahl Rd., Spring, TX. Pastor Scott Powers officiating. Mask are required at viewing and family is encourgaging the use of masks at funeral service. Burial will be at 12 noon at Earthman Resthaven Cemetery, 13102 IH 45N, Houston, TX.

The family of Allen Burch Bradshaw Jr. created this Life Tributes page to make it easy to share your memories.

Send flowers to the Bradshaw family.