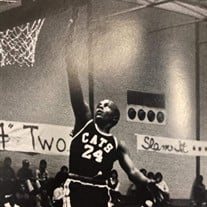 Alonzo Renwick Stephens, 53, of Spring, Texas, gained his golden wings on June 13, 2022, at his home. Alonzo was born July 30, 1968, in Palestine, Texas, to Lillie Wadley and Felix Stephens. He attended Palestine High School. He continued his... View Obituary & Service Information

The family of Alonzo Stephens created this Life Tributes page to make it easy to share your memories.

Send flowers to the Stephens family.