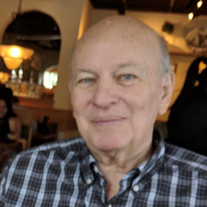 Alvin Lee Johnson went to be with the Lord on June 27, 2020 at the age of 73. He was born November 12, 1946 in Orange, Texas to Chauncy M. Johnson and Ann B. Williams Johnson. Alvin was a devoted man of faith, a loving husband, father and grandfather. He was a proud graduate of the University of Houston where he majored in Business. He also spent seven years serving his country in the US Air Force and during his time in the service he was stationed in Tucson, Arizona where he met and fell in love with his soon to be wife Carol. They later married in 1969 and started their journey of life together. He enjoyed many passions and hobbies and after retiring in 2011 he got to spend more time enjoying those things. His life long passion of playing pool allowed him to travel to play in national tournaments. Later in life he loved to get together with his friends for some friendly competitions of pool and got to spend some of his last few days doing just that. In 2013 he published a book that was a collection of uplifting poems that he had written throughout his life that inspires and gives a spiritual boost. Alvin was preceded in death by his parents and his sister Barbara Hopkins. He is survived by his wife of 51 years Carol Johnson, son Jeffrey, daughter Jennifer and grandson Tyler along with many loving nieces, nephews, cousins and his dear Aunt Floreen Johnson. HIs unwavering faith in the Lord provided him comfort in his final time and is now at peace playing pool with the "Big Man in the sky" and sitting in a rocking chair catching up with his sister. At this time there will be no service but may have a small memorial in the near future. Alvin will be buried privately at the Veterans Cemetery Houston. If you prefer not to send flowers you may donate to the American Heart Association or the American Diabetes Association, or you may reach out to the Johnson family directly at [email protected]

Alvin Lee Johnson went to be with the Lord on June 27, 2020 at the age of 73. He was born November 12, 1946 in Orange, Texas to Chauncy M. Johnson and Ann B. Williams Johnson. Alvin was a devoted man of faith, a loving husband, father and... View Obituary & Service Information

The family of Alvin Lee Johnson created this Life Tributes page to make it easy to share your memories.

Send flowers to the Johnson family.