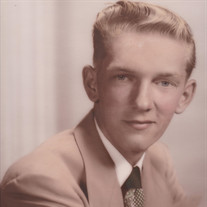 Alvin was born on 7/20/1932 in Beaumont TX. He was the second child of Percy and Jessie Viator, who both preceded him in death. Alvin had 3 brothers, Jean being the eldest, proceeded Alvin in death in 1989. His younger brothers were twins, Ronald Viator and Donald Viator who also proceeded Alvin in death. Alvin’s early scholastic years were all spent in Beaumont TX. When he was old enough to begin working, Alvin had various jobs including driving a cake truck for Tasty Bakery and driving beer delivery truck for Budweiser. For those of you who knew him well, these two jobs were absolutely fitting for a man with a serious sweet tooth and who loved a cold beer, especially while fishing. In 1947, Alvin first met the love of his life, Nadine at Reddicks ice cream parlor. It was then they learned they both were students at Beaumont High School and devised a plan to meet again at school. The rest is a beautiful 73 year history. In 1949, Alvin and Nadine welcomed their first child, Dianne Viator Robertson. In 1952, they welcomed their second child Percy Viator. In 1953, their third child was born, Lana Viator and in 1954, their youngest son was born, Alvin Ray Viator. In 1960 the family moved to Houston where Alvin began a career in Glass at Work Air Control Products. By 1967, Alvin had started is own Glass company, A&L glass, where his children often helped their father with his business. At the young age of 48, Alvin was able to retire and enjoy traveling many parts of the US with Nadine. Alvin was well known for hard work and dedication, so even in retirement, he was brilliant at building beach cabins (1 for his parents and 2 others for his own family) He also purchased several FLIP houses along the way and refused to slow down. Alvin was a family man who would do anything for those he loved. In 1984, he moved back to Pasadena to help care for his ailing father Percy until he passed in that same year. When Alvin’s mother Jessie fell ill, He ultimately moved her to Houston to live in his home, where he cared for her. She later passed in 1991. Alvin had many hobbies that included a love for fishing and his boats, His family spent many years enjoying the self-built beach cabins in Galveston on the Bolivar peninsula. He enjoyed duck hunting and was an avid gardener. Alvin enjoyed the Las Vegas lights and was what some would call a pro at the Craps tables. Several of you here were a product of his teaching and enjoyed casino trips with Alvin. He enjoyed any good literature about the history of war but especially WW1. And as I mentioned before, Alvin had a sweet tooth like no other! He enjoyed a glass of bourbon a day, he said it would cure anything! He built model airplanes, in his spare time. He was a sharp dresser and never wore a pair of blue jeans! He even did yard work in dress shorts. Alvin walked up to 3 miles a day and always enjoyed being outside. It goes without saying, Alvin was a man of great humor and always had a joke to share. He enjoyed sending funny cards for birthdays and was no stranger to playing the occasional prank on those closest to him. His smile and laugh were contagious. On 3/26/22, 73 years were celebrated with his beautiful wife Nadine. They built an amazing life together that was full of love, laughter and family. But Those years didn’t come without times of heartbreak, times that made their family bond even stronger. 1n 1979, Nadine suffered a serious injury that nearly took her life. Alvin never left her side and vowed to protect her every day after. No man could love another as much as he loved her. In 1981, tragedy struck again when Alvin and Nadine lost their youngest son, Alvin ray. But even through tragedy, Alvin, Nadine and their family band together to get through some of their most difficult times. Love, support and determination is what made 73 amazing years. Within those many wonderful years together, Alvin and Nadine were blessed with 4 grandchildren, 1 step grandchild, 9 great grandchildren and 2 step great grandchildren. As you all can see, Alvin lived a long, fulfilling and wonderful life surrounded by those he loved most, those he held dearist. Alvin is survived by his wife, Nadine Viator, Children; Dianne and husband Tommy Robertson, Percy and wife Dinky Viator, and Lana Viator McDonald, Grandchildren; Michael Robertson, Christopher Viator, Dustin McDonald, Brandi Williams and Keisha Marshall, Great Grandchildren; Logan, Deacon, Karsyn, Corbin, Madison, Tristan, Brendan, Jayla, Tyson, Jaylee and David, Brother; Ronald Viator. Alvin is proceeded in death by parents, Percy and Jessie Viator, brothers; Jean and Donald Viator, son; Alvin Ray Viator and niece; Carolyn Hardy.

Alvin was born on 7/20/1932 in Beaumont TX. He was the second child of Percy and Jessie Viator, who both preceded him in death. Alvin had 3 brothers, Jean being the eldest, proceeded Alvin in death in 1989. His younger brothers were twins, Ronald... View Obituary & Service Information

The family of Alvin Viator created this Life Tributes page to make it easy to share your memories.

Send flowers to the Viator family.