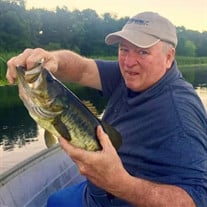 Andrew Bancroft, 62, of Spring, Texas (formerly Fenton, Michigan) passed away on November 23rd, 2021. Services and a celebration of life will be held at Woodglen Baptist Church in Spring, Texas on Friday, December 10th, 2021, at 2:00 pm. Services in Fenton, Michigan will take place at a later date. Andrew was born on June 10th, 1959, to Donald and Sally (Silliman) Bancroft. After graduating from Fenton High School in 1977, he went to Eastern Michigan University to study Business. Thereafter, he moved to Texas, in which he would dedicate the next 35 years to his career at Continental/United Airlines in Houston. He truly enjoyed his co-workers and the friendships he made over the years. Andy was a force to be reckoned with. He was determined to provide for his family and give them the best in life. His family meant more than anything in the world to him, and he never failed to show that love and gratitude. He was unendingly proud of his daughters Jacqueline and April and he was even more proud of his grandchildren. Anyone who knew Andy knew that he was the most loving father and grandfather, and he was always there to support and spend time with them. Andy’s never-ending passion for music was no secret, and the only close competitors were coffee and hot peppers. Very hot peppers. He also loved talking others into eating hot peppers that he grew. He would often be found playing his guitar, drinking coffee, fishing, and playing PokemonGo. His kind nature and laughter will continue to live within all of us, and we are so blessed to have been able to share our lives with him. Andrew is survived by his daughters Jacqueline (Paul) Teeters, April (Jonathan) Young, grandchildren; Antonio Ruiz, Austen Bryan, Faith Young, Brooklyn Young, Cassidy Young, siblings Skip (Joanna) Bancroft, Robert Bancroft, Sarah Bancroft, nieces and nephews, Rachael Bancroft, Tyler Whittico, Evan Bancroft, and Elise Bancroft.

Andrew Bancroft, 62, of Spring, Texas (formerly Fenton, Michigan) passed away on November 23rd, 2021. Services and a celebration of life will be held at Woodglen Baptist Church in Spring, Texas on Friday, December 10th, 2021, at 2:00 pm. Services... View Obituary & Service Information

The family of Andrew Bancroft created this Life Tributes page to make it easy to share your memories.

Send flowers to the Bancroft family.