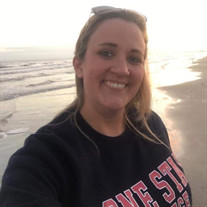 IN LOVING MEMORY Autumn Deanne Rountree was born on January 17, 1978 to Rex and Linda Rountree and was called home to be with our Father on August 27, 2021. She accepted Christ at an early age and was proud to call Jesus her Lord and Savior. Most of Autumn's childhood was spent in Hughes Springs, Texas before moving to the Houston/Spring, Texas area, where she last called home. Autumn graduated from Jersey Village High School in 1996 and went on to obtain her Associates Degree in Business from Lone Star Community College. She excelled academically, making the Dean's List on numerous occasions. Autumn equally excelled professionally; she was an Account Manager for several prominent insurance companies before becoming the Office Manager/Dispatcher for a large, local HVAC company. Those who had the chance to work with her always complimented her on her hard work, diligence and a tough, can-do attitude for a female working in a predominantly male industry. But by far, above all else, Autumn considered being a Mother her greatest accomplishment. She had Landon at 24 years old and was ecstatic the day he was born. With her unconditional love, nurturing and guidance, Landon has grown up to be an incredible young man, whom she was extremely proud of. The close relationship the two shared was one she cherished with all her heart. Along with the profound love for her son, Autumn devoted her time and attention to her family, including ALL her nieces and nephews, anytime ANYONE was in need. She was known for dropping everything she was doing, jumping in her car and running to their aid. Her compassion also extended to animals in need. All of the pets she's ever owned were from shelters and/or ones she rescued off the streets. Her beloved dog Gunner was a rescue, her best friend and was there by her side every step she took. Autumn was also known for her quick wit, hilarious dry sense of humor, and having absolutely no filter on her mouth. At just about every function she attended, she'd have people doubled over in laughter and sometimes even in awe, like "did she just say that??" Autumn was everyone's "Ride-Or-Die", there in a heartbeat to give you the shirt off her back type person. All of these wonderful qualities, she so exceptionally mastered, will truly be missed. Autumn leaves behind to cherish her memory, her mother, Linda Ledbetter, her son, Landon Strauss, her sisters, Amber Neal and Ashley Rountree, her nieces, Briana Craig and Faith Justice, her nephews, Devin Rountree and Justin Neal, along with her best friend of more than 20 years, Laura Slavin Meader and her family. She was loved by an extensive host of family, friends and animals. God bless her soul.

IN LOVING MEMORY Autumn Deanne Rountree was born on January 17, 1978 to Rex and Linda Rountree and was called home to be with our Father on August 27, 2021. She accepted Christ at an early age and was proud to call Jesus her Lord and Savior.... View Obituary & Service Information

The family of Autumn Deanne Rountree created this Life Tributes page to make it easy to share your memories.

Send flowers to the Rountree family.