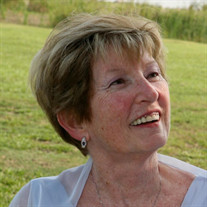 Barbara Lynne Schlensker Mowery, 81, died on Sunday, April 10, 2022, in Tomball, Texas. Although she was born an only child in Columbus, Ohio on February 25, 1941, she formed tight bonds with her cousins. Despite her small stature she played field hockey and basketball, noting she could dribble between the other players' legs. At 16 she traveled on the Queen Elizabeth to Europe and back on the Queen Mary. That trip helped solidify two things: travel would remain a passion for life, but alcohol would not. She attended Bexley High School, then graduated from Capital University in 1962 with her teaching degree. Afterward she began a career in education that would span across 25 years and many locations, including Grosse Pointe, Michigan and Commack, New York. She predominantly taught kindergarten, noting "I want to make sure the kids are shorter than I am!" She met her first husband David Schlensker and they married in 1963. They followed David's job at Alcoa to various locations and welcomed their first son, John, in 1967 while living in Massena, New York. After moving down to Houston in the late 1970s, Lynne continued to teach and acquired two life changing and unexpected surprises, her son Matt, and a new hobby, tennis. Her time on the court would become a favorite pastime as well as part of her professional life. She would eventually work at Wimbledon Racquet Club where her duties included running tennis tournaments. Her sharp wit, dry sense of humor, and direct line to the sheriff's office gave her the edge against unruly tennis moms and dads. Upon retirement, Lynne reignited her love of travel and it was on a trip down the Yangtze River in China where she met the gentleman who would be titled "Sweet Man" in her cell phone, Fred Mowery. They married in 2008 and continued their wanderlust together, seeing sights such as the Pyramids of Egypt, Machu Picchu in Peru, and a safari in Africa, loving every moment of their grand adventures. Between trips Lynne and Fred split their time between Texas and his home in New York, hosted Bunco games for friends and neighbors and spent time with their family. Lynne is preceded in death by her parents John and Virginia Burkert, and her first husband, David Schlensker. She is survived by her husband, Fred Mowery, her sons, John Schlensker (Gina Correa) and Matt Schlensker (Alicia Wisniskie), her grandchildren, Eleanor Mae and Winifred Louise, and her cousins, Roberta Raeder and Jenny Pemberton (Jeff).

Barbara Lynne Schlensker Mowery, 81, died on Sunday, April 10, 2022, in Tomball, Texas. Although she was born an only child in Columbus, Ohio on February 25, 1941, she formed tight bonds with her cousins. Despite her small stature she played... View Obituary & Service Information

The family of Barbara Lynne Schlensker created this Life Tributes page to make it easy to share your memories.

Send flowers to the Schlensker family.