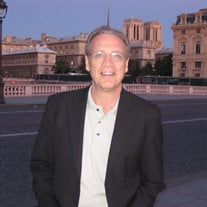 Bernard Brandon passed away at his home on December 2nd, 2020 with his loving wife of 51 years at his side. He leaves behind his wife Sheila, their daughter Tracey, and son Stuart and his family. He was born in England to Bernard and Alice Brandon on October 30th, 1949. He would move his family to the Woodlands, TX for a job transfer in 1979. He was a carpenter by trade and would go on to work as an environmental engineer where he was most successful. He was a meticulous craftsman and strove for excellence in everything he did. He was extremely handy and was the backbone of the family. He was always personable, friendly and had the ability to carry a conversation in any setting. He made everyone feel comfortable and at ease. No matter what, he could find humor & common ground with anyone. He was a traveler and took amazing holidays & trips with his wife & family. His vacations included Hawaii, England, France, Greece and Italy as well as many other beautiful destinations. He lived life to the fullest and took advantage of his time and ability to see the world. He loved British football and was a huge fan of West Bromwich Albion, where he had lived in England. He would spend his weekends watching the premiere league and cheering on his favorite teams. While he had many hobbies, there was none more dear to him than his love for music. He loved to sit on the couch, play guitar and watch television. He turned a spare bedroom into a music room and shrine to the Beatles & Elvis. As a young man, he would save his money and purchase an album per week and he kept collecting throughout his life. While his favorite band was the Beatles, he loved many types of music and genres with the exception of rap. Bernard always put his family first. He did everything to ensure they had what they needed and were secure and happy. He loved spending time with his family whether it was going to dinner, a concert, or going to the theater to see a show downtown. He was a true family man and will be greatly missed by his family and everyone that knew him. The thoughts and prayers of the Addison family and staff are with the Brandon family and friends during this difficult time.

Bernard Brandon passed away at his home on December 2nd, 2020 with his loving wife of 51 years at his side. He leaves behind his wife Sheila, their daughter Tracey, and son Stuart and his family. He was born in England to Bernard and Alice... View Obituary & Service Information

The family of Bernard Peter Brandon created this Life Tributes page to make it easy to share your memories.

Bernard Brandon passed away at his home on December 2nd, 2020...

Send flowers to the Brandon family.