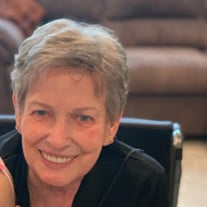 Beverley Cacciatori The relentless spirit known as Beverley Ann Cacciatori joined her daughters Michelle Bromley (Stroup) & Deborah Crupi (Stroup), and her husband Salvatore (Shotsie) Sparacio with our Heavenly Father on June 25th in Houston, Texas. She was born in Darby, PA on August 22nd, 1943 to Lewis Chessman & Gertrude Chessman (Duncan). She was 77 years of age and lived the first 55 years of her life in the Philadelphia/South Jersey area, where she raised four children. After her kids had started families of their own, she left the hospitality industry with which she was so familiar and started working office jobs. She spent many years working at EDS, a company that continually rewarded her hard work with opportunities to grow and advance. She likely would have remained at EDS until retirement before she endured an almost unbearable tragedy, losing two of her daughters in a 2.5 year period from June 1994 to Jan 1997. After fighting through her grief and sadness, without the companionship of her husband, she realized that she wanted to keep the memory of her daughters alive, and committed to being the best grandmother she could be to her many grandchildren, who knew her as Grandee. In 1998, at age 55, she decided to become a flight attendant so that she could travel to places she had never been, while being able to visit her grandchildren whenever possible. She always arranged her flight schedules around holiday gatherings and milestones in her grandchildren’s lives. Her trip to China, arranged by her employer, Continental Airlines, as a group trip, remained a highlight of her travels for the rest of her life. As did a trip where she took two of her granddaughters to Hawaii to celebrate her son Michael’s 50th birthday. One story truly personifies her spirit. At the age of 77, just eight months ago, she learned that her oldest and dearest friend, Florence, was diagnosed with a terminal illness and was being taken home to her daughter’s house in South Jersey from her home in South Florida. It was critical for her to see her friend before she left because she knew that she would likely never see her again. She drove 1,200 miles in each direction from Houston, Texas to Fort Myers, Florida by herself to see her friend before she left for Jersey. Her dear friend passed 9 days later. Along with her husband and two daughters, Beverley is preceded in death by her brother Lewis Chessman, and her sister Sue Chessman. Beverley is survived by her sons Michael Stroup and Jim Stroup (Erin); Her daughter Cassandra Bartolomeo-Frey (Bobby); Her sister Shirley Ounan; Her son-in-laws Bruce Bromley (Carolyn), Paul Crupi, and Tim Green (Christine); Her many grandchildren: Kimberly Stroup, Michael Stroup, Ricky Stroup, Regan Stroup, Nicole Rost (Alex), Tim Green (Nichole), Nikky Crupi (Brien), Candace Crupi, Kristin Crupi (Shawn), Gianna Crupi, Sonny Crupi, Shane Jusino (Cate), Cassandra Horner (Weston), Justin Bartolomeo (Patty); as well as numerous nieces and nephews and 14 great-grandchildren. The many wonderful friends she made in the Houston area over the past 22 years will also miss her dearly. A celebration of Beverley’s life will take place in South Jersey the weekend of her birthday, which is the third weekend in August. Exact day, time and location to be determined.

The family of Beverley Cacciatori created this Life Tributes page to make it easy to share your memories.

The relentless spirit known as Beverley...

Send flowers to the Cacciatori family.