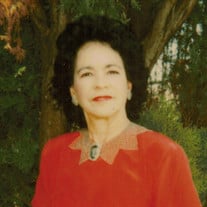 Blanca Medellin Padilla was born January 2, 1932 in Saltillo Coahuila, Mexico. She was a very cheerful person with an outstanding personality. Mom loved to sing, and dance. She had an opera type voice. She was an expert on hitting the high notes, as if she were a professional. She never learned to drive but loved to walk everywhere. Mom said it gave her a sense of relaxation and allowed her to meet people. She was the first person to ride in The Metro Rail on January 01, 2004. lt was a very special occasion for her, the news media was there and televised it. She let them know it was her birthday ride. She was a great optimist and served as our family diplomat countless times due to her energetic outlook on life. ln addition, from was also a very skilled chef and amazingly knew how to cook many different types of cuisine, this cooking skill allowed her to keep our family close by. She knew family meals were important to maintaining family unity. Her closeness to her family also extended in annual travel to her Country of birth, where she would unite with her family. This allowed her to stay in communication with her siblings, aunts, uncles, numerous cousins. Another pleasure in her life was helping care for children both at church and local schools. They had an immense love for each other, she would teach the children Spanish, for which the parents were very grateful. She was blessed with many grandchildren and great grandchildren. Mom was able to utilize her motherly talents to help each and every family member as needed. All these wonderful experiences demonstrated how much compassion & love she had for everyone. What a beautiful person she was. Blanca is survived by her sister, Angelica Medellin Valadez, son, Edward Padilla Jr., daughters, Blanca Brown Gerbitz, and Lupe Padilla Torres, son in law, Keno Torres, Grandchildren; Angelica, Nancy, Mariela, Karina, Gissele, Estevan and Arianna Padilla, Lisa Aviles, Donald, Erick, Karl Gerbitz, Kenneth, Kevin and Kris Torres, Great-Grandchildren; Richard, Athena, Anicia Rodriguez, Cristian and Ashley Aviles, Coen, Christian Kai and Layla Torres, Great-Great-Grandchildren; Jason, Logan, Karl, Athecia, Alexcia Gerbitz, Arist, Alena and Annalea. Blanca is preceded in death by her father, Jose Alberto Medellin, mother, Emma Barrera, son, Alberto Padilla and husband, Edward Padilla. Pallbearers; Kenneth, Kevin and Kris Torres, Estevan Padilla, Donald, Erick and Karl Gerbitz; Honorary Pallbearers; Cristian Aviles and Richard Rodriguez.

Blanca Medellin Padilla was born January 2, 1932 in Saltillo Coahuila, Mexico. She was a very cheerful person with an outstanding personality. Mom loved to sing, and dance. She had an opera type voice. She was an expert on hitting the high notes,... View Obituary & Service Information

The family of Blanca Medellin Padilla created this Life Tributes page to make it easy to share your memories.

Send flowers to the Padilla family.