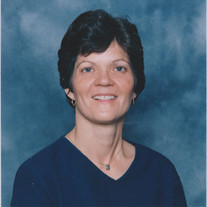 Brenda Marlene (Wunderlich) Walters Born November 19, 1958 in Houston, Texas to Reinhardt Roger Wunderlich and Clarice Kaiser Wunderlich. Passed away peacefully on February 7, 2022 at 63 years of age, with her family at her bedside. Born and raised in Houston, Texas, Brenda later re-located to reside on historical family acreage in Klein, Texas that was descended from older generations of Theiss and Wunderlich lineage. She raised her two children Bonnie and Matthew there, and attended Trinity Lutheran Church in Klein, Texas as a longtime volunteer, employee, and member until her death. Brenda was proud of her German heritage and enjoyed attending local German celebrations and family reunions. Having overcome adversity as a survivor of traumatic brain injury as a young child, Brenda lived her life with a tenacious spirit. Brenda was an early member of Bethany Lutheran church and school in Houston, Texas, where she was also baptized and confirmed before graduating from Lutheran High South. Brenda began her career as a printer for Kinko’s copying services and later used this experience to become the lead print room employee at Trinity Lutheran where she often verbalized how she found meaning in this work. She thoroughly enjoyed Fridays when the church volunteer group known as the “bulletin crew,” gathered to fold and collate the weekly bulletins, socialize, and often go out for lunch after. Brenda accepted any opportunity to “go out to eat” and was partial to Mexican food and a good cheeseburger. In her earlier years, she enjoyed tending to her greenhouse and fostering wild farm cats. Brenda was happiest when surrounded by family, especially her parents, children, and beloved granddaughters. She was a lifelong fan of Houston sports teams, especially the Rockets and Astros, and continued to follow them into her later years. Brenda enjoyed singing songs to the likes of children’s hymns, Patsy Cline, Elvis, The Beach Boys, and one of her favorites, Feliz Navidad. She also enjoyed a good laugh watching family-oriented sitcoms such as Home Improvement, Reba, and Full House. She expressed her pride in her children’s accomplishments and cherished every moment together. The Family Children: Bonnie Kerry and husband Marcus Matthew Walters Granddaughters: Addison Kerry Emmerson Kerry Siblings: Ronald Wunderlich and wife Deborah Kathlyn Cirtaus and husband Steven Larry Wunderlich Numerous nieces and nephews

Brenda Marlene (Wunderlich) Walters Born November 19, 1958 in Houston, Texas to Reinhardt Roger Wunderlich and Clarice Kaiser Wunderlich. Passed away peacefully on February 7, 2022 at 63 years of age, with her family at her bedside. Born and... View Obituary & Service Information

The family of Brenda Marlene Walters created this Life Tributes page to make it easy to share your memories.

Send flowers to the Walters family.