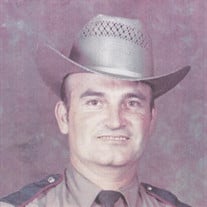 Retired Texas State Trooper, Charles "Charlie" Simms Rogers, age 82, of Spring, left this earth peacefully to spend his eternity with the Lord on the 8th day of December, 2019. He was born on the 21st of December, 1936, in Palestine, Texas, to Ottis Raymond Rogers, Sr and Mary Simms Rogers. He married the love of his life, Beverly Standiford Rogers, on December 10, 1963. Charlie was a determined young man who entered the Army out of high school. Upon completion of his Army tour he joined the Texas Department of Public Safety as a Trooper on September 11th, 1962 retiring on August 30th, 1988. Once retired you could not keep this hard working man down. Charlie went on to open A-Plus Driving School in Spring where he and Beverly worked side by side. Charlie as the instructor and Beverly as his secretary. He was also a rancher/cattleman; entrepreneur; Old Town Spring Landowner and many other numerous endeavors. Charlie's brain was always churning. Although he had a true passion for business, his true love was his family and friends. He was so very proud of the men Jace and Chad evolved into and his four grandchildren were the light of his life. He is preceded in death by his parents Ottis Raymond Rogers, Sr and Mary Simms Rogers; Brother, Ottis Raymond Rogers, Jr; Brother in-law Bob Standiford; Brother in-law Butch Standiford. Charlie Rogers is survived by his loving wife of 55 years, Beverly Standiford Rogers; sons, Jace Standiford Rogers and wife Allison of Spring, and Chad Jeffery Rogers and wife Kelle of Montgomery; grandchildren, Cody Rogers, Jake Rogers, Tucker Rogers and Karlie Rogers; Sister in-law Shirley Rogers; Brother in-law Larry Standiford and wife Pat; Sister in-law Sharon Standiford; and many nephews and nieces. Services for Charlie Rogers will be held at the Addison Funeral Home 18630 Kuykendahl Spring, Texas 77379. The visitation will be held from 5 o'clock until 8 o'clock in the evening, on Thursday, the 12th of December, 2019. The funeral service to honor his life will be conducted at five o'clock in the evening, on Friday, the 13th day of December, 2019. Private burial service for the family Saturday, the 14th day of December, 2019 in Palestine, Texas. Honorary pallbearers Cody Rogers, Jake Rogers, Tucker Rogers, Albert Draeger, Brian Raven, Don Grieder, Dwain Cohn, and J.W. Dueitt.

Retired Texas State Trooper, Charles "Charlie" Simms Rogers, age 82, of Spring, left this earth peacefully to spend his eternity with the Lord on the 8th day of December, 2019. He was born on the 21st of December, 1936, in Palestine, Texas,... View Obituary & Service Information

The family of Charles Simms Rogers created this Life Tributes page to make it easy to share your memories.