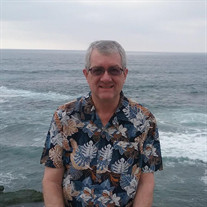 After a tough battle with cancer, it is with great sadness that we announce Charles Edwin Vehslage passed on June 12, 2022 with his family by his side. Charles was born in Waterbury, Connecticut on January 3, 1953. He grew up in Dover, Delaware where he was an active member of Wesley Methodist Church and his community. In fact, his first job was as a paperboy serving the lawyers’ offices on the Green in Dover. With his tips from his route he purchased his own nativity set that his family continues to use today. Charlie played trombone for eight years in school, including the Dover High School marching band. He later played trombone in church accompanying the choir as an adult. He enjoyed music from a young age and was an avid Grateful Dead fan. Charlie was also a voracious reader of various literature and amassed a small library of music and history books. After high school he attended Drew University and continued learning over the years. He later went on to earn his Master Electrician license and was awarded student of the year for four years. His hard work paid off and he even won a nationwide Independent Electrical Contractors’ competition. Charles’ prowess did not go unnoticed and he was asked by his school to teach electrician courses after graduating. He went on to work full time as a facility manager for Hewlett Packard’s Data Center in addition to teaching electrician courses for over 20 years. Charles and Susan enjoyed 47 years of blissful marriage and produced two loving sons, Richard and James. Charlie’s fantastic sense of humor made him a joy to be around. He was always a great source of knowledge and could fix anything with ease. He will be greatly missed by all who knew him. He is preceded in death by his parents, Richard and Ruth, and his son, James. He’s survived by his devoted wife, Susan, his son, Richard, his sister, Norma, his brothers, Royce and Paul, and numerous family members and friends that he loved. The family requests those who wish to express sympathy to consider making a donation to the American Cancer Society, Houston Food Bank or the Houston SPCA.

After a tough battle with cancer, it is with great sadness that we announce Charles Edwin Vehslage passed on June 12, 2022 with his family by his side. Charles was born in Waterbury, Connecticut on January 3, 1953. He grew up in Dover, Delaware... View Obituary & Service Information

The family of Charles Vehslage created this Life Tributes page to make it easy to share your memories.

After a tough battle with cancer, it is with great sadness that...

Send flowers to the Vehslage family.