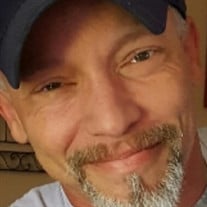 Christopher Allan Duquette passed away peacefully at home with his family on April 23, 2022, after extended complications from Type 1 Diabetes. He was born April 10, 1971, in Victoria, Texas to Evelyn Burrhus Duquette and Allan Duquette. He grew up in Jasper, Texas and graduated from Jasper High School in 1989. He earned his associates degree from Lamar University in Beaumont, Texas and worked for 27 years as a draftsman and then designer in the oil and gas industry. He married Paschian De Ruyver in 1996, with whom he recently celebrated their 26th Wedding Anniversary. Together they raised their two sons, their greatest pride and joys, Jacob Thomas, 22, and Jesse Allan, 17. Christopher loved hanging out with his friends, playing video games, modifying his car and spending time with his three-legged dog, Hoppy. Above all, Christopher loved being with his family. There was no place he would rather be than with them. In recent years, Christopher took multiple out-of-state assignments to provide for the family he so loved. The Duquettes all looked forward to family night, even when it was done by speaker phone. Though hundreds of miles apart, their most cherished place to be was always, simply, together. Christopher was also very active and took great pride in his family’s dog rescue efforts. As a team, the Duquettes fostered, rehomed, and rehabilitated, more than three hundred dogs from the streets and shelters of the greater Houston area. He was a constant example of kindness and compassion for his sons, teaching them to care for those who couldn’t care for themselves, whether the “those” had two legs or four. It's very difficult to put into words how incredible Christopher was. He was a kind, generous, patient and loving man. He was a giving and devoted husband and father who would do anything for his family. He never spoke a harsh word to anyone and was the first to comfort and care for those in need. Christopher was loyal, compassionate and considerate. He had a wonderful sense of humor and a smile that would light up a room. And, if Christopher Duquette was your friend, you had enough friends. Though no longer in our sight, Christopher is still very much with us. His memory moves in the smiles of those who love him. His generosity runs, tail wagging, in every household in which he helped provide a pet. His spark twinkles in the eyes of his best friend, truest love and devoted wife, Paschian. And he will always be very much alive in his precious sons, who are the men they are because of the father he was. Jacob and Jesse will always be his greatest legacy. Christopher is preceded in death by grandparents, Paul Burrhus, Liliane Duquette and Louis Denis Duquette; niece Brittany Lewis and nephews Chandler and Ian Lewis. He is survived by wife, Paschian Duquette and sons, Jacob and Jesse Duquette; parents Evelyn and Allan Duquette; sister Ann Duquette Pulliam and brother in law, Ross Pulliam; grandmother Mary Burrhus; nephews Allan and James Pulliam, Kian and Zachary Lewis and nieces Kaitlyn and Kylie Lewis, Zoei Palmer; his dog, Hoppy, and a plethora of rescue animals to whom he gave not only shelter but love.

Christopher Allan Duquette passed away peacefully at home with his family on April 23, 2022, after extended complications from Type 1 Diabetes. He was born April 10, 1971, in Victoria, Texas to Evelyn Burrhus Duquette and Allan Duquette. He... View Obituary & Service Information

The family of Christopher Duquette created this Life Tributes page to make it easy to share your memories.

Christopher Allan Duquette passed away peacefully at home with...

Send flowers to the Duquette family.