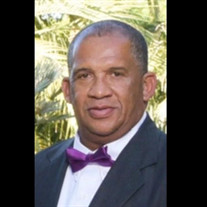 Clarence James Coleman, age 63, passed away peacefully on Thursday, February 24, 2022 at his home in Houston, Texas. He was born October 24, 1958, in Lafayette, Louisiana to Clarence Coleman and Helen Comeaux Coleman. Clarence was a graduate of Holy Rosary Institute, also in Lafayette, where he excelled in various sports. He also attended Southern University in Baton Rouge, Louisiana. Clarence was an avid fisherman and enjoyed many other outdoor activities. Clarence married his college sweetheart and love of his life, Anita Campbell, on August 6, 1983 in Shreveport, Louisiana. To that union, they had three sons: Clarence “CJ” Coleman, Christian Joseph Coleman, and Courtney Javon Coleman. Most recently, Clarence worked as an Operations Manager with Turning Basin Service, Inc where he exhibited an immense compassion for his profession and associates by way of leadership, integrity, and dependability. He found happiness in the simplest of things: spending quality time with his family, visiting with his multitude of friends on the phone, and supporting the endeavors of people in his midst. He was a selfless man with a servant’s heart who would always put others before himself. As a father, he was the best teacher, mentor, and idol to his three sons. As a grandfather, he cherished his granddaughter, Sahara Giselle Coleman. Clarence is survived by his wife, Anita; three sons, Clarence “CJ”, Christian (Catherine, much loved daughter-in-law), Courtney (beloved Kendra); his cherished mother-in-law, Jenny Lampkin; five siblings: Gwendolyn Lewis, Phyllis Mouton (Lyle), Wayne Carlton Coleman, Thomas Allen Coleman (Victoria), Alberta Howard (Shannon); and numerous cousins, nieces, nephews, and many life-long friends.

Clarence James Coleman, age 63, passed away peacefully on Thursday, February 24, 2022 at his home in Houston, Texas. He was born October 24, 1958, in Lafayette, Louisiana to Clarence Coleman and Helen Comeaux Coleman. Clarence was a graduate... View Obituary & Service Information

The family of Clarence Coleman created this Life Tributes page to make it easy to share your memories.

Send flowers to the Coleman family.