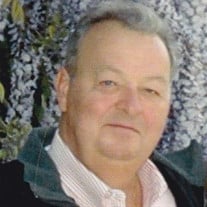 Craig S. Gilmore, 81, of Spring, Texas, passed away on April 6, 2021. He is preceded in death by his parents, Cullen and Elizabeth Gilmore. Craig is survived by his loving wife of 60 years, Arlene Florence Gilmore, his children; son, Craig Steven Gilmore and wife Rhonda, son, Joseph Michael Gilmore, daughter, Melanie Gilmore Sloan and husband Gregory. Grandchildren; Andrew, Cody and Joshua Espieg, Laura Gilmore Bantug, Catherine Gilmore, Amanda, Garrett and Austin Sloan. Great Grandchildren, James, Luke, and Colin Bantug and Ryleigh Sloan, and Niece, Debbie Muha. Craig was born in Montgomery, Alabama on March 31, 1940. As an only child, he loved to run and play with his German Shepherds, Maggie and Gloomy. He played the trumpet, boxed and was on the swim team. In 1956 he moved to Irvington, New Jersey with his mother at the age of 16. It was at that time when he met the love of his life, 14 year old Arlene. They were married in January of 1961. After high school, while working at RCA, he invented the very first liquid crystal watch. At this time, he was also toiling away at school and finally graduated after 13 years of nights from Newark College of Engineering with a degree in Chemical Engineering and another in Metallurgy. He did this all while raising his family, including coaching his children's sports teams. In 1972, he took a job with Nash Engineering and moved his family to Watertown, Connecticut. This job moved his family to Virginia Beach, Virginia in 1983 and then on to Spring, Texas in 1985. He retired from Nash Engineering in 2006 and spent the remainder of his days traveling, spending time with his family and enjoying his favorites of listening to classical music and reading. He loved being a Texan and especially loved the time he spent with his grandchildren and great grandchildren. Craig has invented many products in the engineering world and has many patents. Craig was a larger than life man both physically, mentally and in his heart, with a booming voice that he used to tell many stories his life- especially about growing up in Alabama. Being the gentle giant that he was, he was always there to lend a helping hand to anyone in need, but he is mostly known for his great love and devotion to his family. He will be greatly missed by many. Please join the family after the funeral service for lunch and to raise a toast to celebrate Craig's life at Greg and Melanie Sloan's House - 17415 Pinewood Forest Spring, Texas 77379

Craig S. Gilmore, 81, of Spring, Texas, passed away on April 6, 2021. He is preceded in death by his parents, Cullen and Elizabeth Gilmore. Craig is survived by his loving wife of 60 years, Arlene Florence Gilmore, his children; son, Craig... View Obituary & Service Information

The family of Craig S Gilmore created this Life Tributes page to make it easy to share your memories.

Send flowers to the Gilmore family.