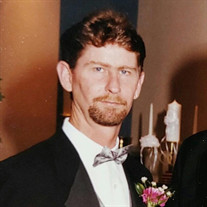 Curtiss Henry Elkins born June 13, 1961 at Carswell Air Force Base in Fort Worth, Texas to Robbie Elkins and Patricia Merrill Gustely, passed away Saturday November 7, 2020 at the age of 59. Curtiss was a man that loved his family & friends; he lived everyday on the edge and to the fullest. Curtiss learned at a very young age how to take things apart and put them back together, beginning with Swapping bicycle seats and handle bars to running off with his moms only car at the age of 16 for over a week and returning it to her with big racing tires, loud exhaust and a monster hood scoop that you had to look out the window to see over. Curtiss was always modifying engines and every vehicle he owned. During the 80s he moved from Houston up to Temple Texas where he ended up meeting a couple brothers who owned an outdoor equipment business. Curtiss was immediately accepted as a shop tech; during the many years working there he received several certified master tech certificates from all the major small engine manufactures. It was during this time he built a dirt track race car and was all in every weekend, head to toe mud, grease and a cold one. He really enjoyed himself. A few years later he returned to the Houston area and started using his mechanical skills to earn a living working in the same field. Curtiss then turned the tables and started his own business providing commercial ground maintenance to several management properties in the Houston area. This was his passion for the next 4-5 years. It was after this that he decided to work even harder in this great Texas climate and open a small specialized moving service, (CURTMAN MOVING). He operated his moving business for many years where he made many friends in the industry. This path led him to His next and most meaningful employment, Thompson Delivery Service. He was an all around guy at Thompson with expert knowledge of the business. He moved on from Thompson’s several years later, as did the owners and began to provide his knowledge and expertise to John Thompson’s, Burdette’s Home Barn in Spring, Texas. During his lengthy work history he always managed to enjoy his trips to Montana visiting his mother, sister and family while hunting every chance he got. Throughout his life he was a very skilled and experienced mechanic. There wasn’t much he couldn’t fix, as he had every tool known to man. Curtiss loved the outdoors no matter if it was working on a mechanical project he dreamed up, fishing off the gulf coast or the nearest puddle of water, hunting trips to Montana or just sitting by the camp fire putting back some cold ones with friends. Everything he did, he did with a passion and gave it his all. Curtiss didn’t have any children, instead he had his little K-9 furry friends which he loved & cared for deeply. His dogs were just another one of his lifelong passions. Curtiss will be missed by all who knew him; he was a unique man who stood strong in his ways. Rest in peace our beloved son, brother, and uncle. We love you. Curtiss is preceded in death by his Father Robbie Elkins, Step-father Robert Blacklock, Grandparents Curtis and Mary Ransom, Niece Erica Lewis, Niece Riley Lewis, Uncle Hank and Aunt Alice Merrill, Cousin Chuck Merrill. Curtiss is survived by his Mother Patricia Merrill Gustely, brothers and sisters, Robert Blacklock, Lynn Schwarz, Janet Williams, Elaine Lewis, Wayne Blacklock, and Uncle Curtis Ransom, Raymond Gustely, many nieces and nephews. Curtiss had many other lifelong friends and special acquaintances, including the William’s families. Pallbearers: Wayne Blacklock, Rogers Williams, Curt Ransom, Robert Blacklock, Seth Blacklock, Jody Blacklock

Curtiss Henry Elkins born June 13, 1961 at Carswell Air Force Base in Fort Worth, Texas to Robbie Elkins and Patricia Merrill Gustely, passed away Saturday November 7, 2020 at the age of 59. Curtiss was a man that loved his family & friends;... View Obituary & Service Information

The family of Curtiss Henry Elkins created this Life Tributes page to make it easy to share your memories.

Send flowers to the Elkins family.