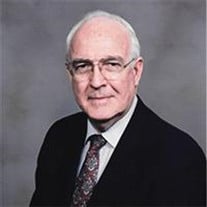 Daniel Edward Jennings, beloved husband, father, grandfather, and great-grandfather died peacefully on June 26, 2020 in Spring, Texas. Dan was born in Burlington, Vermont on November 1, 1929. He grew up in Rutland, Vermont attending Christ the King Elementary School and Mount Saint Joseph Academy. As a young man he was a member of the Green Mountain Club and was an avid hiker and camper. He graduated from St. Michael’s College in Winooski Park, Vermont with a degree in English and went on to get a Master of Social Work degree from Boston College. Dan served on active duty in the US Army Reserve in the Medical Service Corps as a Social Work Officer. He was employed as a Psychiatric Social Worker in San Francisco and also taught at the University of San Francisco. While living in San Francisco he met and married Mary Veronica Gill in 1959. Dan and Mary moved to Bowie, Maryland where Dan taught at the Graduate School of Social Work at The Catholic University of America in Washington, DC. He received his Doctor of Social Work degree from Catholic U in 1965. Dan taught and was Acting Dean at Portland State University in Portland, Oregon. The opportunity to serve as Dean of the Worden School of Social Service at Our Lady of the Lake University in San Antonio brought the family to Texas. Dan was a charter member of the National Association for Social Workers and enjoyed attending their annual meetings. He served as a board member for Catholic Charities USA for 9 years. He also served on the Council for Social Work Education, the Conference of Deans and Directors of Graduate Schools of Social Work, and on the Accreditation Commission of the Council on Social Work Education. In 1978 Dan and Mary moved their family to Houston where Dan served as the Dean of the Graduate School of Social Work at the University of Houston and where he also received the honor of Professor Emeritus. During a yearlong sabbatical from the University of Houston Dan was honored to serve as a delegate to the United Nations representing the NGO Caritas Internationalis. Dan continued his professional life after retiring from University of Houston through his work as Program Director at Shalom Center in Splendora, Texas. He also worked with the Jesuit Educational Center for Human Sexuality in Chicago, Boston and Washington, DC. In the early 1970s Dan and Mary were a Team Couple for the Marriage Encounter Movement and then became very active in the Focolare Movement (Work of Mary). During his retirement years Dan enjoyed being able to attend daily Mass. He served as a lector and as an Extraordinary Minister of the Eucharist. The privilege of bringing Holy Communion to the homebound provided him with the opportunity to develop new friendships with those he served. Dan will be remembered for his ability to find the humor in even the most difficult situations. His open heart and willingness to go the extra mile to help others made life a little brighter for many. He was always eager and genuinely interested to hear updates on the lives of not only his children, grandchildren and great-grandson but also any friend that had ever been a part of his life. His dedication to his wife Mary, especially during the last years of her life, was an inspiration for all who knew him. Health challenges during the last years of his life took their toll on his ability to get around physically but he continued to be concerned about the well-being of not only his family but his caregivers and his fellow assisted living residents. He will be missed by many. Dan is survived by his daughter Mary (Richard) Cumberland and his four sons: Danny (Jennifer), Phil (Alison), Tom (Sheri) and Bob (Jodi) Jennings and by his twelve grandchildren: Sean (Erika), Drew (Carter), Courtney, Andrew, Joshua, Jacob, Samuel, Hannah, Cole, Lilah, and Sophie Jennings and Will Cumberland and by his great-grandson Paxton Jennings. He is also survived by his brother and sister-in-law Michael and Vivian Jennings and his sister-in-law Marcille Gill and ten nieces and nephews and their families. He is preceded in death by Mary Gill (his wife of 58 years) and his parents Dan Sr. and Mary Hall Jennings. In lieu of flowers, we ask that you to please make a donation to your favorite organization that promotes unity. Due to the Covid-19 situation all services will be for immediate family only. Please use the link below to live stream Mr. Jennings service at 10:30am July 6, 2020 https://www.youtube.com/watch?v=eel0m9xCITw&feature=youtu.be

The family of Daniel Edward Jennings created this Life Tributes page to make it easy to share your memories.

Send flowers to the Jennings family.