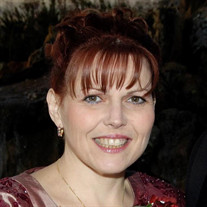 Darlene Marie Ferguson was born in Johnson City, Tennessee where she met her husband and love of her life Michael Ferguson. They were married for 39 years. She followed Michael through his military career to different parts of the world. After completing military service together, they settled in Spring Texas with their two children Eric Ferguson and Tara Clayton. After a 2 year battle with cancer, Darlene succumbed to pneumonia in Spring Texas on April 25, 2020 Darlene is preceded in Death by her father: J.B. Sweeny and mother: Betty Sweeny, Samuel Dean Miller Sr, Minnie Marie Miller,(Sister) Barbara Gail Sweeney, (Brother) Lenny Miller, (Sister) Rita Miller,(Sister) Georgeann Miller. She is survived by her husband Michael Ferguson, children Eric Ferguson, his spouse Elizabeth Ferguson, (daughter) Tara Clayton and spouse Brad Clayton, Grand Children Dylan and Julian Ferguson, Lilly and Rose Clayton. Brother Samuel Miller, (nieces) Deana Dugger and Amber Lafon Darlene was a skilled homemaker, well-educated, and tenacious in nature. She was devoted to home schooling her children and various church callings. She worked close to 15 years as a registrar for Houston Northwest Medical Center with many cherished co-workers. She had an immense love for her husband and family which transcends this life and moves to the next. Darlene made sure that there were Sunday dinners every week and a family vacation once a year. She was always looking to do fun activities with her grandbabies. She continually made efforts for all of her loved ones. She will always be in our hearts and in our memories as a beloved wife, mother, grandmother and friend. We will love you always through time and eternity. A private family viewing will take place at Addison Funeral Home, Spring, Texas. A public memorial will be held at a later date. In lieu of flowers, the family requests that you make donations in Darlene’s name to the American Cancer Society.

Darlene Marie Ferguson was born in Johnson City, Tennessee where she met her husband and love of her life Michael Ferguson. They were married for 39 years. She followed Michael through his military career to different parts of the world. After... View Obituary & Service Information

The family of Darlene Marie Ferguson created this Life Tributes page to make it easy to share your memories.

Darlene Marie Ferguson was born in Johnson City, Tennessee where...

Send flowers to the Ferguson family.