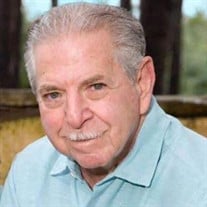 James David Farrar blessed this world on February 8, 1941, in Fort Smith, Arkansas, and joined our heavenly Father on June 15, 2022. He was surrounded by loved ones on the day of his passing and though his cross over to his home in the sky was sudden, the impact he made in so many people’s lives will be everlasting. David attended and graduated from Aldine High School in Houston, Texas. After high school he dedicated 2 years to HCC and following college he taught shop at Furr High School. David owned and operated Tape Machine shop for 30 years, he grew it into a very successful business. The man loved to bring his passions to reality, one of which was owning & training quarter horses. When he wasn't working in his shop and loving his horses, he was celebrating life with his wife Jenny. Eventually he retired and began spending most of his time with his love Jenny, creating everlasting memories. They began to travel, engraving moments on their hearts. Stories of the open road, boating, and sightseeing; the wonders they created will live forever. Hearing country music fill the air, started those dancing boots; nothing could keep them off the dance floor. Mickey Gilley playing will open a locket of joy of all the good times. After 81 short years on this earth, with his wife by his side, he took his last breath, letting go of the pain of his failing body. Though his death has caused us to grieve I pray you seek comfort in knowing he is no longer in agony; he has been gifted everlasting life. There is comfort in knowing he is watching over his loved ones. He is predeceased by his mother Edna and his father Otis, his brothers Red and Johnny Farrar & his sisters Louise and Sharon. He is survived in love by his loving wife of an amazing and admirable 24 years Genoveva (Jenny) Farrar. He is honored and remembered by his children: Jared Farrar, Cindy Hilborn/David, Sam Pace, Anthony Pace/Trish, Rebecca Pace/Eric, and Vincent Pace. His memory will live on to his 11 grandchildren and 7 great grandchildren.

James David Farrar blessed this world on February 8, 1941, in Fort Smith, Arkansas, and joined our heavenly Father on June 15, 2022. He was surrounded by loved ones on the day of his passing and though his cross over to his home in the sky was... View Obituary & Service Information

The family of David Farrar created this Life Tributes page to make it easy to share your memories.

Send flowers to the Farrar family.