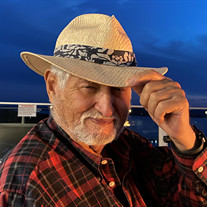 David Edward Safford, 79, passed on to Heaven’s Glory on Good Friday, April 2, 2021 at his home in Spring, Texas. He was born May 12, 1941 in San Antonio, Texas. David graduated from LaMarque High School in 1959 and began his lifelong career with Southwestern Bell. He retired in 1997 after 40 years of service. David was an Installer, District Union Steward and held several offices for the Telephone Company Pioneers. In 1984, he joined the volunteer group of Pioneers on a goodwill mission to Japan called “Santa Goes to the Orient” and was an outstanding Santa. The trip was great but also really gave him a taste of travel that would last the rest of his life. David and his wife, Martha, started a travel agency in 1991 and over the next 30 years were blessed to travel thr world with so many awesome travelers who became great friends. He had a brilliant mind and recall. He could talk on most any subject, from Antarctica to Zambia, Aliens to Zoos, and nearly everything in between. He loves to cut a rug with his wife and desserts were his favorite part of any meal. He enjoyed sitting in his rocking chair and visiting with family and friends. David had a special gift of making any chair he sat in, rock. David is preceded in death by his parents, Louis and Thelma Safford and two daughters, Karen Kay and Amy Lynn. He is survived by his wife, Martha, sister; Darlene (John), brother-in-law; Larry Vanderveer (Donna), children; Tina Taylor and Julie Safford, Cindy Havens (Rusty), Ronnie Davis (Julie), Rene’ Hickman (Mark), nephew; Lee Nelson (Jeannie) and niece; Autumn Hurd (Steve). He was Papa David or PD to his grandchildren; Christopher Safford (Alyssa), Josh Krebs, David Donovan (Irasema), Kevin Donovan (Brittany), Justin Jackson (Brittany), Jonathan Havens, Stevee Snyder, Starla Davis, Crystal Kresta (Taylor), Josh Griffin (Katherine) and Shelby Waller. Most important were his GREAT grandchildren; Colin, Sydney, Danielle, Michelle, Kylee Kate, Xzavier, Haley, Joshua, David, Jr., Gracelynn, Cheyann, Lexee, Lillian and Riley, as well as many cousins, great nieces and nephews. In lieu of flowers, the family requests that a memorial be sent to Spring Baptist Church – Bill Able Scholarship Fund. 633 East Louetta Road, Spring, Texas 77373 or Wounded Warriors Fund.

The family of David Edward Safford created this Life Tributes page to make it easy to share your memories.

David Edward Safford, 79, passed on to Heaven’s Glory on Good...

Send flowers to the Safford family.