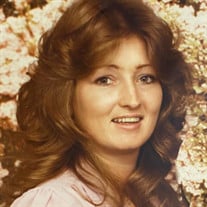 Deborah Jo Mallory-White, age 65, went to be with our Lord and Savior on Tuesday, May 11, 2021. She was born on February 16, 1956 to Billy “Bill” and Victoria “Vickie” Mallory. She was the third of five children and due to her father’s work in the oil & gas industry, she traveled all over the world to places such as Venezuela, Libya, Spain, Greece, & Lebanon. In between travels abroad, she grew up in Moore, Oklahoma where she met and married Tyree Jones in 1974 with whom she had 2 children, Bridget and Tyree. Deborah remarried Michael White in 1980, who also worked in the oil & gas industry, which resulted in them living in Texas, Libya, Greece and Egypt throughout the years. She eventually settled here in Texas living in Tomball, Spring, Trinity, and the finally in then Woodlands. Deborah worked in the auto industry doing accounting work. She enjoyed spending time with her family and friends, fishing, playing card games, and recently in the last few years really enjoyed playing (and winning) bingo. Deborah is preceded in death by her father and mother, her brother, Kris Mallory and niece Jennifer Lemon. She leaves behind her brother and sister-in-law, William “Kirk” and Sandra Mallory, her brother Kenneth Mallory, her sister and brother-in-law, Patricia and Cliff Ward, her daughter and son-in-law, Bridget and Frank Skelly, her son and daughter-in-law Tyree and Brandi Jones, her grandchildren, Allen “AJ” Fredwell, Bryant Jones, Lauren Jones and Claire Skelly, 2 great grandchildren, Lydia Fredwell and Faron Fredwell, and numerous beloved nieces, nephews, extended family and friends. In honor of Deborah, please consider making a contributable donation to MD Anderson Cancer Center. https://www.mdanderson.org/donors-volunteers/donate.html

The family of Deborah Jo Mallory-White created this Life Tributes page to make it easy to share your memories.

Deborah Jo Mallory-White, age 65, went to be with our Lord and...

Send flowers to the Mallory-White family.