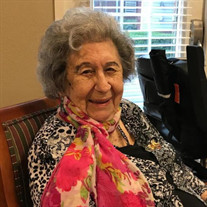 In Loving Memory of Dorothea Mary Gelcher Tripp Mitchel - December 8, 1922 to April 6, 2021 Dorothea was the only child of Lucy Agnes Casey and Charles Gelcher and she was born in New York City and raised in the Bronx, NY. Her mother Lucy suddenly passed away in 1926. Following the death of her mother, Dorothea was raised by her grandmother and several aunts. She graduated High School and at the onset of WW11 she enlisted in the USMC in 1942 and was promoted to a corporal serving as a communications specialist until her honorable discharge in August 1945. While in the service Dorothea met Raymond Tripicchio in California who was also in the USMC and served as an aviation mechanic as well as participating in the invasion battle of Guadalcanal. Raymond was also discharged in August 1945. In November of 1945 they were married in NYC in the St. Francis of Assisi church. Subsequently they settled in the Albany, NY area where they raised five children. They lived in Norwalk, Connecticut, Pittsburg, Pennsylvania and ultimately permanently settled in the Houston, Texas area. Raymond passed away on November 6, 1995 and was interred at Houston National Cemetery. Dorothea ultimately met and married Theodore Mitchel who later passed away from cancer. Dorothea dearly loved her family, was extremely proud to be a Marine, was a devout Catholic, said the rosary most days until the last few weeks of her life, was an incredible seamstress, very creative and could recreate any craft she saw, loved square dancing, loved being on the open water and taking cruises. She lived through the great depression and therefore learned to be extremely thrifty. She was extremely active until after falling a few times after she turned 90. She endured a shattered hip which limited her activities. Although it did not slow her down too much as she would get on her red electric scooter and go around the assisted living facility telling jokes to everyone. She loved to make people laugh. Dorothea was preceded in death by both of her parents and is survived by her children: Raymond W. Tripicchio and wife Rosalie of El Cajon, CA, Richard C. (Peter) Tripp and wife Kimberly of Malibu, CA, Elaine M. Eaves of Livingston, TX, Sharon A. Lester of Cypress, TX, David J. Tripp and wife Terri of Cypress, TX, 11 grandchildren, and 13 great grandchildren. As a devout Catholic and Christian her family knows Dorothea’s soul is now in heaven and her most positive spirit lives on in all the hearts of her family and her many friends she made during her life’s journey. She will be interred at Houston National Cemetery. Due to COVID, the funeral mass will be live streamed via FaceBook using this link https://fb.me/e/dp9m0DBfE. A reception will be held after the funeral mass at Sharon Lester's house. The family understands those that are not comfortable attending the funeral mass and/or the reception due to COVID. Dorothea's mass will be held in the Mary Chapel at Prince of Peace Catholic Church, which is located directly across from the main church.

In Loving Memory of Dorothea Mary Gelcher Tripp Mitchel - December 8, 1922 to April 6, 2021 Dorothea was the only child of Lucy Agnes Casey and Charles Gelcher and she was born in New York City and raised in the Bronx, NY. Her mother Lucy suddenly... View Obituary & Service Information

The family of Dorothea M. Tripp Mitchel created this Life Tributes page to make it easy to share your memories.