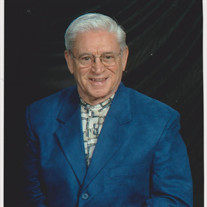 Dr. Donald Charles Hickman was born August 16, 1931 in Burlington, Iowa to the late Charles W. Hickman and Mary Hickman. Donald graduated from Burlington High School where he was active in sports and briefly attend Burlington Junior College before enlisting in the Air Force in 1951. After completing Basic Training and Airborne Radar School, he was accepted into Pilot Training and after completing Flight School he served three more years as a flight instructor at Gary Air Force Base in San Marcos, Texas. It was there he met his wife to be, Barbara Jane Dahl, on a blind date while she was attending Southwest Texas State Teachers College. They married February 5th, 1955 in Yoakum, Texas. After being discharged from the Air Force he completed his pre-dental education at Southwest Texas State Teachers College in San Marcos, Texas and then attended the University of Texas Dental Branch in Houston, Texas, graduating in 1962. He established a private practice in Winnie, Texas and practiced there for nearly 13 years. He then joined the faculty of the University of Texas Dental Branch in Houston and was with the University for 19 years, retiring in 1993. He was active in multiple Methodist churches where he and his wife were members through the years: first at First United Methodist Winnie-Stowell, then Glenbrook United Methodist in Houston, and then at Wildwood-Village Mills Methodist. After retirement he and Barb moved to Ivanhoe, Land of Lakes in the beautiful Piney Woods of East Texas. There he had more time and a workshop to practice his skills as a craftsman. He spent his days creating a variety of wood items that he gifted to family and friends. Don loved the Lord and his pride for his sons and their families was beyond measure. In 2018 he and Barb moved to The Solana Preserve Vintage Park, a senior living facility in Houston, Texas to be closer to family. Don is survived by his wife of 67 years, Barbara, and by his sons Mark (Sherry) Hickman of Tomball, Texas, Gary (Laurie) Hickman of Sandy, Utah and sister Emily Odaffer of Burlington, Iowa. He was proceeded in death by his parents, Charles and Mary Hickman and younger brother Jimmy, parents-in-law William and Pauline Dahl, and son Dale Hickman. Don is also survived by grandchildren: Lauren Hickman, Erin Eitel, Heather Nunez, Taylor Hickman, Anna Hickman, Hayden Hickman, Hayley Hickman, Lily Hickman and bonus grandchildren Kristina Trader, Justin Silver, Jessica Seggebruch and Reis Seggebruch, 7 great grandchildren, 2 nieces and a host of friends. A Celebration of Life Service will be held on Saturday, August 6th, 2022 at Wildwood-Village Mills United Methodist Church at 11:00 AM. Memorial Contributions to: Undesignated Memorial Fund – Wildwood-Village Mills United Methodist Church P.O. Box 98 Village Mills, Texas 77663

The family of Dr. Donald Charles Hickman created this Life Tributes page to make it easy to share your memories.

Send flowers to the Hickman family.