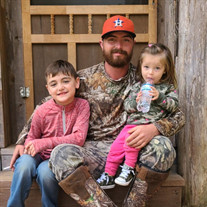 Dylan Blake Fojtasek, 30, of Spring, Texas passed suddenly in a tragic accident on December 3, 2021. He was born August 9, 1991, in Houston, TX to Marie and Kevin Fojtasek. The first five years of his life, he was a perfect angel causing his parents to create what would become his partner in crime, Jared. Dylan had a beautiful singing voice and was in the school choirs through middle and high school. In addition to being placed into a chorus made up of middle school students from all of Spring ISD, he was accepted into the top choir at Spring High School. On May 10, 2012, Dylan would start to feel some of the grief he had put his own parents through when he became the father of Caden, a smaller version of himself. Then, on January 2, 2020, Dylan finally met the only girl who was ever able to control him when his daughter, Anistyn, was born. Dylan had a talent for all things mechanical and worked much of his adult life in mechanic shops before he went to work for Harris County in the road and bridge department. He finally found the job and company he had been looking for and was very happy to be driving an 18-wheeler traveling between towns and enjoying the open road. Dylan’s primary passion in life was his kids, but he also had many other interests. When there wasn’t something else going on, you would usually find him around his garage working on one of his trucks or motorcycles, or just hanging out with friends. During white-tail season, he would most often be found either up a tree or in a blind with a bow or a gun waiting for a deer to visit his feeder, many of which would get away because he was asleep. As soon as the water was warm, and sometimes when it wasn’t, Dylan would be on the lake with his family and friends hogging the water time wakeboarding or wake surfing or terrorizing anyone unlucky enough to be riding another tube alongside him as he was a master of knocking others off or simply landing on top of them. Dylan was fiercely competitive in everything he did and cornhole was no exception. Wednesday nights would usually find him throwing bags in a tournament somewhere. He was also an assistant coach for his son’s baseball team through two seasons where his patience and love for children shined. Though there were many struggles in his adult life, it was rare to find Dylan without his infectious smile and laugh while blowing out the birthday candles someone was trying to light, blocking the person trying to blow them out, sticking his wet finger in someone’s ear, or “crop-dusting” people as he walked by. He was a person who was hard for people not to like and, given enough time, he would eventually win over anyone. Dylan was preceded in death by his grandfathers, Ed Brooks and Alton Fojtasek, Sr. He is survived by his children, Caden Blake Fojtasek of Spring and Anistyn Blake Fojtasek of Spring, his girlfriend, Amy Gutowski and her son Jayce of Spring, his parents, Kevin and Marie Fojtasek of Spring, his brother, Jared Fojtasek of Dallas, maternal grandmother, Clarinda (Sissy) Brooks of Spring, paternal grandparents, Jack and Donna Zimmerman of Spring, and numerous aunts, uncles, and cousins. Dylan's friends and family have organized a reception at District 249 on Saturday, 12/18 to play cornhole and enjoy videos and photos of Dylan; please join them to share your own memories. In lieu of flowers, please make contributions to https://www.gofundme.com/f/dylan-blake-fojtasek.

Dylan Blake Fojtasek, 30, of Spring, Texas passed suddenly in a tragic accident on December 3, 2021. He was born August 9, 1991, in Houston, TX to Marie and Kevin Fojtasek. The first five years of his life, he was a perfect angel causing his... View Obituary & Service Information

The family of Dylan Fojtasek created this Life Tributes page to make it easy to share your memories.

Send flowers to the Fojtasek family.