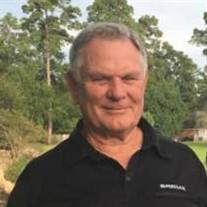 Edwin Stephen (Steve) Roberts, 71, of Spring, TX passed away on December 20, 2019. He was born in Houston, TX on December 20, 1948. He is survived by his daughters Stephanie Roberts Wells and Cindy Roberts Warner, sons-in-law Mike Wells and Wilson Warner and grandchildren Katie and Julia Wells, and Rhett and Wyatt Warner, sister Marian Harvey and brother Darrell Roberts. He was preceded in death by his parents Mary Helen and Marion Roberts, brother Randy Roberts and his beloved wife Ellie Strack Roberts. Steve split his career as an employee at Southern Pacific Railroad and Gulf Coast Metals in Houston, where he retired in 2014. He was an avid sportsman, both as a participant and as a spectator. A league bowler at Diamond Bowl in Houston and more recently Tomball Bowl, he rolled a perfect “300” game on three separate occasions. He was also an avid golfer, participating in the Senior Olympic games in New Mexico this past summer. He was a longtime member of Tomball Country Club, golfing multiple times a week with dear friends. He was a devoted fan of the Houston Astros, University of Texas football and Baylor University women’s basketball. He enjoyed watching his grandchildren participate in soccer, baseball and track and field events. He loved his family, his dogs, and competition of any kind. He will be missed by those that knew and loved him. Visitation with his family will be held at Addison Funeral Home,18630 Kuykendahl Rd., Spring, TX 77379 on Thursday, December 26th from 6 pm – 8 pm. Memorial service at 9 am Friday, December 27th at Addison Funeral Home. Graveside service will follow at Earthman Resthaven, 13102 North Freeway, Houston, TX 77060.

Edwin Stephen (Steve) Roberts, 71, of Spring, TX passed away on December 20, 2019. He was born in Houston, TX on December 20, 1948. He is survived by his daughters Stephanie Roberts Wells and Cindy Roberts Warner, sons-in-law Mike Wells and... View Obituary & Service Information

The family of Edwin Stephen Roberts created this Life Tributes page to make it easy to share your memories.

Send flowers to the Roberts family.