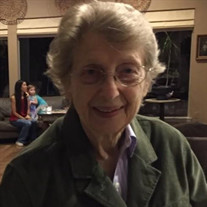 Preceded in death by her husband of 43 years, William J. Dixon, her father, Eugene P. Canzler, her mother Catherine Therese Koch, and brothers Eugene, Raymond and Richard Canzler. Bette was born in New York City on August 21,1929 and grew up in New York and New Jersey. She is survived by her sister, Therese Reilly and her husband, George. Also, she is survived by her daughter and sons and their life partners, Cathy Dixon and Steve Frisk, John Dixon and Julie Buck and Bill and Denise Dixon; Granddaughter, Emily Elizabeth Dixon, Grandson and his wife Shane and Crystal Dixon and their children Claire and Marissa. Bette, as her friends called her, touched a lot of lives and had many, many friends, colleagues, students, patients and their families. Bette and Bill met in 1951 while she was getting her Registered Nurse degree at St. Catherine’s Hospital and School of Nursing in Brooklyn, NY, and vacationing with her fellow nursing student and life-long friend Adele. After Bette and Bill were married in New York City in 1953, they lived a nomadic Air Force life, moving frequently and seeing many places like England, Bolivia, Honduras and countless towns and cities in the United States. First, she was a loving wife and mom, raising three kids who turned out to be as stubborn and hard-working as she was. During these stops along the way in her full and meaningful life, she worked as a Pediatric and Staff Nurse in many one- or two-year stints with various hospitals, schools and U.S. government facilities within and outside the United States. Once the family finally settled in Bellevue, NE, Bill’s final posting, Bette began to pursue her career as an exceptional Nurse, Caregiver and Teacher. The main thing everyone saw who knew Bette was that she always cared about and for others first, whether it was her family, her patients, her nursing students and fellow faculty members or friends. She was simply one person who gave everything she could to help others, heal them, educate them, mentor them—inspiring them to reach their own potential. Bette had other life-long passions: for animals especially dogs and horses, birdwatching, hiking, walking her dog Elle and practicing yoga. She loved classical music and had a secret talent for playing the piano. All told, over the next 30 years she achieved many things in addition to raising her children while working, including completing two bachelor’s degrees, a Master’s degree and completing the coursework for a Doctorate. She also advanced from an Instructor to Assistant Professor at Creighton University; her teaching gave all three children the priceless gift of a tuition-free undergraduate education, and inspired them to pursue post-graduate studies. After her retirement from the Creighton faculty in 1998, Bette moved to The Woodlands, TX (a suburb of Houston) to be close to her family and continued to work as a part-time school nurse in the Conroe Independent School District until she was 80. She lived until the age of 90 surrounded by her family, which she treasured. She carried on with grace, optimism, care for others, stubbornness and good humor, while coping with the consequences of Alzheimer’s Disease. She still “practiced” Nursing until the end, continuing to care about and for others in her Memory Care facility. She passed away peacefully and went to the comfort and peace of her next journey. The Addison family and staff extend their condolences to the Dixon family.

The family of Elizabeth Dixon created this Life Tributes page to make it easy to share your memories.

Preceded in death by her husband of 43 years, William J. Dixon,...

Send flowers to the Dixon family.