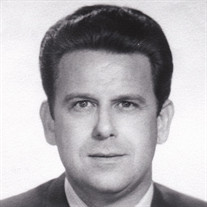 Elmo Jude Bonnin, 86, of Spring, TX, returned to the Lord on December 26, 2019. Elmo was born April 28, 1933 in Sulphur, Louisiana at the family home at 802 Ruth Street to Wilfred Joseph Bonnin and Lillian Guidry. Elmo is predeceased by his parents, and his sister, Theresa Bonnin Granger and brother, Wilfred Grant Bonnin and his in-laws Burnett H. Kitzmann and Mary Mildred Vandergriff. Elmo attended all public schools in Sulphur graduating from Sulphur High School Class of 1951. After beginning college he was called up to the Army where he served in the Tank Company, 85th Regiment of the 10th Infantry Division, Bamberg, Germany, from April 1955 to April 1957. Upon his return he continued his education at McNeese State University, graduating in 1960 with a Business degree. Moving to Houston for work, he was recalled to service in 1961 during the Berlin Crisis but did not go overseas. Elmo returned to Houston after discharge and took up his job at HL&P where he remained for 10 years. In the early 70s Elmo found most rewarding job in furniture sales, beginning his career at Hilsher's Furniture in Houston eventually becoming manager of the 20th Street store. From there he joined J. A. Olson Co. happily traveling around Texas and Louisiana selling pictures and frames. He eventually returned from the road to work at United Furniture in Bellaire. Retiring from sales at Pearland Furniture Store after age 74 gave Elmo more family time. On September 18, 1967, Elmo married Carolyn Ann Kitzmann in St. Rose of Lima Catholic Church in Houston, Texas. They were blessed with two beautiful daughters, Michele Marie and Lori Ann. In 1993, Elmo and Carolyn were divorced but remained close until his death. Elmo helped Carolyn through the difficult years of caring for her elderly Mother. In 2006 with an empty nest at home, Elmo and Carolyn decided to share the house and expenses and take care of one another in their older years. Elmo never tired of traveling, from exploring Europe during his Army days, to taking the family on camping trips and quick visits to see extended family in Louisiana when the girls were young, and sightseeing historic Texas to a memorable drive through the Colorado Rockies, he loved to be on the road. After attending his 60th high school reunion, a reunion of his old Army Tank Company in Branson, MO, and two last great family vacations in recent years, one to the Grand Canyon and one to Florida, Carolyn and Elmo stayed closer to home. As his activities slowed down he continued to enjoy his quieter pursuits such as studying genealogy, tracing his family back to France and even the American Revolution, cooking a mean pot of chicken and rice, and rooting for his favorite teams, the Saints, LSU, the Texans, and the Astros. Elmo had a life-long love of music from his days in the high school band and vocal quartet through a year-long stint in the Army band and membership in the Houston Choral Society in the 1970s. In his retirement he returned to his Cajun roots as an avid listener of zydeco music, making several trips home to Louisiana for music festivals. Elmo is survived by his daughters, Michele Bonnin and Lori Bonnin, ex-wife Carolyn Kitzmann Bonnin, his nieces and nephews, and beloved cats. Visitation with his family will be held at Addison Funeral Home, 18630 Kuykendahl Rd., Spring, TX 77379 on Thursday, January 2, 2020 from 5 pm – 8 pm. Memorial service at 9:45 am Friday, January 3, 2020 at Addison Funeral Home. Graveside service will follow at 11:30 am at Houston National Cemetery, 10410 Veterans Memorial Dr., Houston, TX 77038.

Elmo Jude Bonnin, 86, of Spring, TX, returned to the Lord on December 26, 2019. Elmo was born April 28, 1933 in Sulphur, Louisiana at the family home at 802 Ruth Street to Wilfred Joseph Bonnin and Lillian Guidry. Elmo is predeceased by his... View Obituary & Service Information

The family of Elmo Bonnin created this Life Tributes page to make it easy to share your memories.

Send flowers to the Bonnin family.