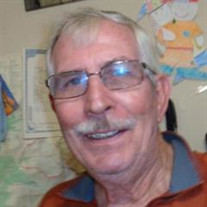 Harlan Pool Jr. passed away peacefully on the morning of April 28th, 2020 in Houston, Texas. He was born in Mclean, Texas in 1946 to Harlan Sr. and Decie Mae. He was a loving brother to his siblings Carolyn, Barney, Alma and David. Harlan attended Mclean High School and then served in the military where he was stationed in Heidelberg, Germany with the 529th M.P. company. After his service ended he settled back in his beloved home state of Texas and attended college in Temple. Harlan is preceded in death by his father and mother, older sister Carolyn and brother Barney, nephews Donald and Tommy. He is survived by his children Michelle, Lance his wife Kim, and Mark; his sister Alma and her son Carl, and brother David and his wife Ellen, and their son Tim and daughter Amy, Carolyn’s children Barbara, Allan, Eric, Russell and Victoria. He is also survived by his precious grandchildren Madison, Carson, Austin and Tess who will miss him dearly. Harlan had built a successful real estate business in the Houston area. He enjoyed getting in as much fishing as possible at Lake Conroe. Among those he met, he was known as a very loving and generous man with a wonderful sense of humor and sharp wit. In his later years, he discovered hiking and climbing in the Sierra mountains. He was determined to climb Mt. Whitney which he did on a number of occasions with his family. During those trips he was always quick with a joke and a smile about how he “doesn’t do snow” while standing in a pile of it on the mountain. He once took in a stray dog that he said, "he was getting rid of the next day" but kept her day in and day out until she had 6 more puppies. He kept and cared for all of them. The grandkids once sent him a paper cut-out characters called Flat-Stanley. He would take it with him whenever he went on a trip and take a picture of both him and that flat-Stanley together to send to the kids. He was that wonderful. I know, dad would like to give a deep heartfelt thank you and appreciation to both Karen Pool and Hein Nguyen for all the love and support throughout the years and especially during his cancer treatments. A memorial service will be announced at a future date so friends and family can attend. In lieu of flowers, the family request you make donations in Harlan’s name to the American Cancer Society. Harlan will be truly missed by both friends and family, and I will finish this in his own words. “Thanks, have had a good life with no regrets except, I wish I had one more day.”

Harlan Pool Jr. passed away peacefully on the morning of April 28th, 2020 in Houston, Texas. He was born in Mclean, Texas in 1946 to Harlan Sr. and Decie Mae. He was a loving brother to his siblings Carolyn, Barney, Alma and David. Harlan... View Obituary & Service Information

The family of Harlan Andrew Pool created this Life Tributes page to make it easy to share your memories.

Harlan Pool Jr. passed away peacefully on the morning of April...

Send flowers to the Pool family.