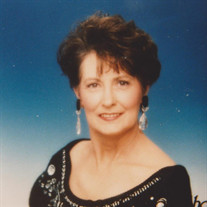 Harriet Blanche Borne, 77, of Spring, passed away peacefully at home surrounded by her loved ones on June 23, 2021, after suffering a long illness. Harriet was born on August 17, 1943, in Richmond, Virginia to Harry and Clara (Stephens) Buford and 9 years later welcomed a baby brother, Austin David Buford. Harriet grew up in Baton Rouge, Louisiana surrounded by the Stephens side of her family which included her grandmother and many aunts, uncles, and cousins. Her first marriage gave her the joys of her life, daughter Becky in 1962 and son Donnie in 1964. On Dec. 2, 1972, she married the love of her life, Maxie Borne, and gained three more children to love - Mike, Patty and Greg. They subsequently spent 20 years in Kaplan, La. raising their blended family and staying close to Maxie’s loving father, Charles A. Borne, Sr. They later moved from Kaplan in 1994 and spent the following years close to where their children lived in San Angelo, Texas and Las Vegas, Nevada, and then finally in Spring, Texas where they have resided for the past 18 years. Harriet worked for many years as a bookkeeper and later earned her associate’s degree from Heritage College in Las Vegas. She took great pride in her work, however, her greatest source of pride was her family. Everything she did, she did with her family in mind. An amazing cook, she spent decades cooking for her loved ones, and lovingly catered to Maxie’s palate. She knew exactly how he liked things and took great pleasure in spoiling him. She would spend hours creating new desserts for others, rarely partaking in them herself. Food was one of the ways she showed love and witnessing others enjoying her food gave her great joy. Later seeing her children and then grandchildren also become wonderful cooks, especially in Cajun cuisine, was something that made her immensely proud. A talented seamstress, she loved sewing and making crafts but especially for her family. Harriet thoughtfully remembered details about people and often reflected that in the gifts she gave or things she did for them. She also enjoyed the simple things in life. She loved flowers (especially roses and bearded iris), daily naps, her beloved dogs, her Community Coffee, and all things LSU. An avid reader, she loved books and started each day the same - quiet time with her books and coffee. She was early to bed and early to rise with the exception of LSU football. Nothing delighted her more or could bring out more excitement in her than watching her LSU Tigers. Rarely was a game missed and it was a hobby and passion that Harriet and Maxie shared for decades. January 26th was a special date for Harriet and this year marked her 40th year of sobriety with AA - an accomplishment that is not surprising to those who know of her willpower, determination, and stubbornness. One of her most defining qualities was that she loved to be needed and help others which, combined with her strength and wisdom, made her a perfect fit for the structure of AA. A natural leader, she spent many years serving and helping countless others as they navigated their own journey to sobriety and living a life of recovery. Harriet is preceded in death by her parents, Harry Buford and Clara Stephens Buford Jones; father-in-law, Charles A. Borne, Sr.; and son Greg Borne. Harriet’s wishes were to be cremated and her final resting place will be in the family plot in Kaplan. She is survived by her devoted husband of 48 years, Maxie Borne; children Becky Burgess, Donnie (Mary) Bamburg, Patty (Dennis) White, and Mike (Rebecca) Borne; 11 grandchildren: Ashleigh, John, Alexis, Haley, Ian, Erin, Jason, Sarah, Jacob, McKeag, and Stuart; 12 great-grandchildren: Madi, Cade, Kelsie, Faith, Quinn, Mia, Stella, Louie, Alex, Charlie, Teddy, and Olivia; brother David (Linda) Buford and nieces Jennifer and Marisa; and numerous aunts, uncles, and cousins. The family would like to extend a special thanks to Dr. Casagrande for his many years of exceptional care, the staff of Memorial Hermann Hospice, and their friends and neighbors, Robert, Gissel and Gabby, for their longtime support and care.

Harriet Blanche Borne, 77, of Spring, passed away peacefully at home surrounded by her loved ones on June 23, 2021, after suffering a long illness. Harriet was born on August 17, 1943, in Richmond, Virginia to Harry and Clara (Stephens) Buford... View Obituary & Service Information

The family of Harriet Blanche Borne created this Life Tributes page to make it easy to share your memories.

Send flowers to the Borne family.