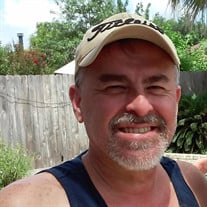 Israel was born August 30, 1961 in Kingsville, TX to parents Israel and Rachel Escobar. His friends and family referred to him as Izzy. His hobbies included playing darts, hanging out with friends and watching sports. His favorite teams were... View Obituary & Service Information

The family of Israel Escobar created this Life Tributes page to make it easy to share your memories.

Send flowers to the Escobar family.