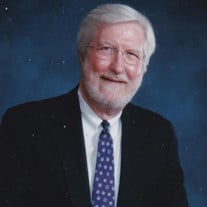 Jim Marbach, Ph.D. died peacefully at his home in The Woodlands Texas on March 2020 at the age of 82. He was preceded in death by his parents Elgin W. and Lydia Marbach, and his brother Elgin T. Marbach of Converse Texas. Jim is survived by his wife of 44 years, Linda and his children Gregory Marbach and his wife Jennifer, Eric Marbach, Laura Marbach and her husband Caleb, Kacie and her husband Carl, and his grandchildren Robert, Jackson, Julia & Kyle. He will also be missed by his feline companions Addie & Alby. Jim was born in Converse, Texas. He graduated from a three-room school in Converse. Jim then went onto earn a bachelor of Science degree from St. Mary’s College in San Antonio. He had two distinguished careers. He began his first career at Brooke Army Medical Center as a physicist where he worked for David G. Simons a veteran of Project man high. While at Brooke he designed experiment payloads for high altitude balloon tests measuring radiation in the upper atmosphere. Upon learning of a new NASA facility in Houston, Jim left to work for the manned space flight program beginning work on project Gemini. During his career at the Manned Spacecraft center, he designed & flew radiation experiments on the Gemini IV, VII, X and XII space missions. The first experiment, MSC-2, that flew on Gemini IV was the first non-medical experiment to fly on a manned mission. He continued at Nasa until a year after Apollo landed on the moon continuing his research in high altitude radiation experiments. Jim then returned to school to achieve a Master’s and Ph.D. in Physics in Medicine, training under Gilbert Fletcher at MD Anderson. During his distinguished career in medical physics, he authored a seminal research paper on radiation effects on implanted cardiac devices during radiation therapy. Jim was most at home working with the patients in the radiotherapy clinic. His career in Physics was the passion of his life until he retired at the age of 80. Throughout his life Jim most enjoyed meeting and speaking with people. Anyone he met became an instant friend. He loved his family passionately and was their biggest fan and cheerleader. He would often brag of their accomplishments to anyone who would listen. A Memorial Service and reception will be held at The Woodlands United Methodist Church. Pastor Rob Renfroe will officiate the ceremony. The service is tentatively scheduled for mid-April - details to follow. All are welcome to attend and celebrate Jim’s life. In lieu of flowers Jim would ask for a small donation to The Loft Church at The Woodlands United Methodist Church in his name, address 2200 Lake Woodlands Drive, The Woodlands, Texas 77380 Services will be held at a later date when the Covid-19 situation passes.

Jim Marbach, Ph.D. died peacefully at his home in The Woodlands Texas on March 2020 at the age of 82. He was preceded in death by his parents Elgin W. and Lydia Marbach, and his brother Elgin T. Marbach of Converse Texas. Jim is survived by... View Obituary & Service Information

The family of James "Jim" Robert Marbach created this Life Tributes page to make it easy to share your memories.

Jim Marbach, Ph.D. died peacefully at his home in The Woodlands...

Send flowers to the Marbach family.