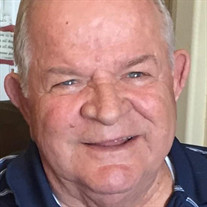 James Carroll Leo passed away on July 18, 2020 after a hard-fought battle with Covid-19. Jim worked tirelessly to keep from getting the virus for many months before succumbing to the disease. James is survived by: his wife, Patricia Ann Leo; his two daughters Kim Crosby and her husband Rodney and their three children: Colby, Caden, and Cooper of Montgomery, Texas and Beth Pali and her husband Brett and their two children Erin and Drew of Spring, Texas; his step-daughter Kim Hayden of Spring, Texas and step-son Lieutenant Colonel Casey Hayden and his wife Pam and their two children Malin and Reid of Omaha, Nebraska. Jim is also survived by his brother Brian Leo and wife Kathleen of Flint, Texas, and sister Debbie Crawley and her husband Dace of Florence, Mississippi as well as nieces and nephews. Jim was preceded in death by his parents. Jim was born in Shreveport, Louisiana on October 8, 1941 to Edmond and Carrette Leo. His high school years were spent as an avid “Golden Crane” at Crane High School in Crane, Texas earning many athletic achievements. He graduated from Northeastern Oklahoma University in Tahlequah, Oklahoma with a degree in education. His then started his career as a teacher and football coach in Alpine, Texas. Jim coached in various places throughout Texas and even spent some time with the Chicago Fire, one of the early teams in the World Football League. Later, he became a principal in the Conroe Independent School District. His last role in education was in the Spring Independent School District as an Assistant Superintendent. He came back out of retirement two or three times while with Spring ISD to help out during special circumstances. Jim loved football, golf, wood-working, reading, and watching Aggie football. He enjoyed spending time with family and friends as well as other believers. Both he and Pat spent countless hours working through various Bible studies in the Precept Bible Study Series. He enjoyed his time with friends in the Caring Friends Class at Spring Baptist Church, his Alzheimer’s Support Group, as well as his Thursday morning breakfast club. He was a problem solver and often took on difficult projects both at home and in his work. He loved Merle Haggard and anything on KSBJ. He will be deeply missed by his friends, family, and all who knew him. A memorial service is scheduled for July 29, 2020 at 10:00 am at Spring Baptist Church located at 633 East Louetta Rd. in Spring, Texas. Pastor Barry Klempnauer will officiate. In lieu of flowers, the family is asking that donations be made to the American Alzheimer’s Association.

James Carroll Leo passed away on July 18, 2020 after a hard-fought battle with Covid-19. Jim worked tirelessly to keep from getting the virus for many months before succumbing to the disease. James is survived by: his wife, Patricia Ann Leo;... View Obituary & Service Information

The family of James Carroll Leo created this Life Tributes page to make it easy to share your memories.

Send flowers to the Leo family.