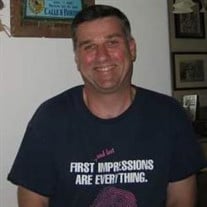 James “Jim” Craig McNutt Age 59, of Spring Texas passed away surrounded by love at home on August 12th, 2019 Jim is survived by his wife, Kimberlie McNutt, children, Ashley (Jeremy) Newlin, Nicholas (Shelby) McNutt, and Brianne (Tyler) McNutt, stepchildren, Jason and Justin Harmon, 3 grandchildren, mother and stepfather, Carole and Virgul Bengston, and sister, Kathryn Kendrick. He is preceded in death by his father, Ralph McNutt. Jim was born in Sterling Kansas on August 1st, 1960. He took an interest in becoming a police officer from a young age and followed that interest to serve for over 30 years in law enforcement. He found a love for fingerprints early in his career and took his passion to become a certified latent fingerprint examiner serving in multiple areas through the country and Europe in his career. He was instrumental in building a foundation for the latent print unit in the New Orleans laboratory which has expanded into 14 laboratories across the country. Though he was an internationally recognized expert in the science of fingerprints, his equal passion was sharing his knowledge with others, teaching hundreds of officers and agents across the country. Jim enjoyed spending time with his wife and children as much as possible. Jim was a loved husband, father, son, brother and friend who will leave a legacy in both his personal and professional life. A memorial service will be held at 1pm on August 17th at Addison funeral home followed by a presentation by the Honor Guard. In lieu of flowers, donations can be made to the Bladder Cancer Advocacy Network or Sam Houston State University College of Criminal Justice 50th Anniversary Freshman Academic Scholarship Endowment at https://www.shsu.edu/dept/university-advancement/donate.html The thoughts and prayers of the owners and staff of Addison Funeral Home are with James' family and friends.

The family of James McNutt created this Life Tributes page to make it easy to share your memories.

Send flowers to the McNutt family.