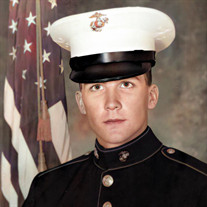 James Earl Spykerman was born in Houston, TX Dec. 31, 1956, lived most of his life in Montgomery County, Texas and died in the Michael E. DeBakey VA Hospital in Houston of heart failure due to COVID-19 after several weeks of a valiant struggle to overcome this terrible disease which has claimed so many. He was baptized on February 10, 1957, in Pilgrim Lutheran Church in Houston, TX and confirmed in the faith in Zion Lutheran Church, Tomball, TX. Although he later left all organized religion, he died a believing Christian and we know he is with our Lord and Savior, Jesus Christ and our family and his friends who were waiting to joyfully welcome him to heaven. Jimmie attended Pilgrim Lutheran and then Tomball Lutheran Schools through the eighth grade, then graduated from Magnolia High School in Magnolia, TX. He joined the U.S. Marines in 1975 and served for four years. He attended some community college before working in the building trade as an expert carpenter and very capable electrician, plumber and floor installer and acquired many other skills. He was an expert at barbecue and learned to make and can jelly from fresh fruit that he picked. Although he, like his father before him, was quick to anger and often profane, he also had a wonderful sense of humor, was generous with his time and his skills, loved beautiful things and had great taste when choosing gifts. He read often and even ordered new books to read while he was in the hospital and, to the end, was a staunch Republican in his politics. In the past few years he endured several serious health issues, some painful, which kept him from doing all the things he wanted to do. We rejoice for him that all pain and frustration has been replaced with eternal joy and peace. As a proud former Marine, he asked to be buried in the National Cemetery with his "brothers." As Jimmie would like to say, Semper Fi. We have honored his request rather than having him join the rest of the Spykermans in Zion Lutheran Cemetery where he already had a place reserved for him. Once we were a family of six and now we are two. Jimmie (Jim to his friends) was preceded in death by all of his grandparents, his parents, Gene and Rose Ann Ranville Spykerman and brothers infant Larry Gene and Larry Paul Spykerman. Left to mourn him are his daughter, Angela Fawn Spykerman (Ryan Steward), step-son Cory Hunt (Shelter), sisters Sandra Warren (Tom) and Susan Spykerman, grandchildren Lydia, Mason, Jordyn, Carson and Hayden, two nephews, one aunt, one uncle and five cousins. Also grieving is his girlfriend of 15 years, Kathleen Smith and former wives Kerry Ann and Maggie. The Reverend Jerome Teichmiller, who was his confirmation pastor, officiating.

James Earl Spykerman was born in Houston, TX Dec. 31, 1956, lived most of his life in Montgomery County, Texas and died in the Michael E. DeBakey VA Hospital in Houston of heart failure due to COVID-19 after several weeks of a valiant struggle... View Obituary & Service Information

The family of James Earl Spykerman created this Life Tributes page to make it easy to share your memories.

Send flowers to the Spykerman family.