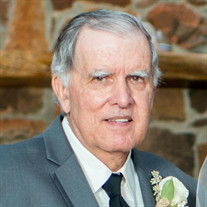 Jimmy Joe McMullen was born on March 10, 1947 to Cecil McMullen and Joe Laura Galbreath in Waco, TX. The majority of his childhood he lived with his mother and step-father T.W. (Buddy) Smiley in Waco. In his late high school years, he moved to McGregor and lived with his father (Cecil) and step-mother, Margaret McMullen. After graduating from McGregor High School in 1965, he attended Sam Houston State University in Huntsville, Texas where he earned Bachelor and Master Degrees in Education. While in college, he met his wife, Marian, and they were married in 1968 in Jasper, TX. After getting married, Jimmy served in the Airforce from 1967-1971, stationed primarily in Japan. Jimmy and Marian celebrated their 52nd wedding anniversary in February of 2020 just before she graduated to Heaven. Jimmy Joe was an elementary P.E. coach for 40+ years, lovingly referred to as “Coach Mac”. He taught in Aldine and Klein ISD’s for the majority of that time. He often said he had the best job in the world, getting to “play all day”. He also started a jump rope team in Aldine, the Bayou City Skippers, that traveled around preforming and competing in numerous events. Jimmy also had a deep faith and loved Jesus with all he had. He was very involved in his church, Spring Baptist, where the service will be held. He was a part of the “bread of life” Sunday school class, helped start a church-wide weekly bible study of The Chosen, and had a cherished group of men he did breakfast and bible study with each week as well. Jimmy had his first heart attack in 2007, which thankfully resulted in more life to live, but now 14 years later he had another that ended up taking his life instantly on Sunday morning the 27th of June. He left this earth loved by so many and his family is comforted knowing he has now received his heavenly body and is now walking and talking with Jesus, and seeing his beloved wife again. He is survived by his daughter Allison and son-in-law Matt Krause, grandson's that loved their Pop-Pop dearly, Noah Krause, Beau Krause, and Eli Jimmy Krause. Sister, Jan Fullick and her husband Pat. Sister, Mary Witte and husband Chris. Sister-in-Law, Charlotte Leddy and her husband Stephen Leddy. Sister-in-Law Joann Burnett and numerous nieces and nephews who all loved him dearly. Celebrations of his life will be held at the following locations: Visitation will be at Addison Funeral Home at 18630 Kuykendahl road in Spring, TX on Friday, July 2nd from 5:00pm to 8:00pm. Funeral Service will be at Spring Baptist Church at 633 E. Louetta Road in Spring, TX on Saturday, July 3rd at 1pm in the student ministry building. Burial will be at the Houston National Cemetery at 10410 veterans memorial drive in Houston, TX on Tuesday, July 6th at 9:30am All Remembrance flowers may be sent to Addison Funeral Home.

Jimmy Joe McMullen was born on March 10, 1947 to Cecil McMullen and Joe Laura Galbreath in Waco, TX. The majority of his childhood he lived with his mother and step-father T.W. (Buddy) Smiley in Waco. In his late high school years, he moved... View Obituary & Service Information

The family of Jimmy Joe McMullen created this Life Tributes page to make it easy to share your memories.

Send flowers to the McMullen family.