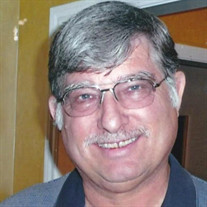 Joel Welshons, 69, of Spring, TX, passed away peacefully on May 7th, 2020, following his long struggle with FTD. He was born to Betty and Amos on the military base in Fort Benning, GA in the Spring of 1951 and raised in Hastings, MN alongside 8 brothers and sisters. He attended Hastings High School and earned his Associates Degree from Lakewood with a focus on criminal justice. Joel found the love of his life, Debbie Beebe, by chance on a blind date and married her 2 years later during the historic blizzard of 1975; a story which was his favorite to tell. A couple years after moving to Texas for warmer weather and so he could start his training with the police academy, the couple was blessed with their first child Nicole born November 1985. They were blessed again with the birth of their second child CJ in October 1989. Joel, known to his siblings as Jody, had many jobs before he found his home with the Houston Police Department. He could sell wood to a forest, traveled the US laying turf for 3M and even had a stint at a Koch refinery. Though he was good at anything he set his mind to, his heart was always set on being a police officer, following in his father’s footsteps. In his 30-year career with HPD, he took great pride in his work going above and beyond. He had a way with people that made them feel comfortable talking to him. He was known for his great sense of humor and always had a smile on his face. Throughout his life Joel was as dedicated to family as his career. As a young man he looked out for his younger siblings with care, encouraging them to do well in school. While early hobbies included wood working and watching Vikings games, his life was quickly centered around coaching his kid’s sports teams—never missing a game. He loved working on computers, a skill he passed down to his son. He enjoyed family vacation road trips which often included camping and fishing. Family down time was spent gathered around the table playing cards and curled up on the couch watching shows together. He also enjoyed golfing with his son and teaching his daughter how to play pool. Joel was a 37-year active member of Hosanna Lutheran Church in Houston. He never met a stranger and will missed by so many. He held compassion for those around him and never refused to help someone in need. Preceded in death by his parents, Amos and Bette Welshons; infant daughter Kimberly Welshons and sister-in-law Leslie Welshons. Survived by his wife, Debbie, of 45 years; children, Nicole and CJ Welshons; brothers: Mark, Bill (Bonnie) and Dan (Donna) Welshons; sisters: Susan (Gary) Hoffman, Tracy Welshons, Lynn (Steve) Schneider, Marnie (Chris) Schaffer and Gena (Brian) Jones as well as numerous nieces, nephews, other relatives and many close friends. Joel will remain forever in their hearts. A celebration of his life will be held at Hosanna Lutheran Church in Houston, TX later this summer.

Joel Welshons, 69, of Spring, TX, passed away peacefully on May 7th, 2020, following his long struggle with FTD. He was born to Betty and Amos on the military base in Fort Benning, GA in the Spring of 1951 and raised in Hastings, MN alongside... View Obituary & Service Information

The family of Joel Adam Welshons created this Life Tributes page to make it easy to share your memories.

Joel Welshons, 69, of Spring, TX, passed away peacefully on May...

Send flowers to the Welshons family.