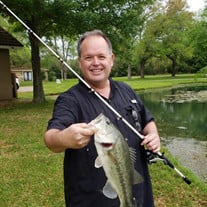 John Mason Frye, Jr., Vice President of First Aid and Safety at Texas AED & Safety and resident of Spring, Texas passed away unexpectedly on May 7th, 2022 in his home at the age of 55. He lived at 6806 Enns Lane Spring, TX 77379. John is survived by his beloved wife Tonya Frye: children Rebekah and Andrew Ellis of Bluford, Illinois, Courtney and Tyler Hoyt of Huffman, Texas, Jesse and Maggie Farra of Houston, Texas, EmaLee and Blake Wooten of Spring, Texas, Kathleen Frye and Keiston Ferguson of Klein, Texas, Chelsey Frye of Tomball Texas, Savannah Frye of Tomball, Texas, Jason Frye and Max Franco of The Woodlands, Texas, and Mason Frye of Tomball, Texas. Grandchildren; Sofia, Bentley, Hudson, and Dazy. John is survived by his mother, Kitty Frye; siblings Eric and Stacy Frye, Steven and Lori Frye, Molly and David Wilmington; and his Aunt Peggy along with many other aunts, uncles, cousins, nieces, and nephews. He is embracing his father John Mason Frye, Sr.; Uncle David Preston; grandparents: Bill and Mel Punessen and Marshall and Grace Frye; and best friend David Toney in heaven. John was born in Bremerhaven, Germany on April 3rd, 1967 to Kitty Punessen Frye and the late John Mason Frye, Sr. He was the first graduating class to come from Klein Oak High School and graduated from Sam Houston State University with a bachelor’s degree in marketing. On September 9th, 2009, he married the love of his life, Tonya, and together they blended a family that he cherished. His wife and children were the most important and cherished people in his life. John was a lover of people. He never met a stranger and saw the good in everyone he encountered. His faith was paramount- he constantly searched for Jesus and strived for heaven. He was a loving husband who ensured that his wife was taken care of and felt loved. He was a devoted father that profusely exclaimed his pride for his children. He was the greatest Papa to his grandchildren and always provided them with stories and candy. John was a renowned storyteller. He could make the most mundane thing into a grand story that brought joy to so many. Aside from telling stories to anyone who would listen, John’s favorite thing to do was fish. He was the greatest fisherman and found joy even when he caught the smallest fish. A Celebration of Life is scheduled for 10 a.m. on Thursday, May 12th, 2022, at Community Of Faith in Hockley, Texas. Ryan Dockery and Amber Harbolt will officiate. Flowers, donations, and condolences may be offered during this celebration of life. Community of Faith 16124 Becker Road Hockley, TX 77477 On Thursday, May 12 at 10 AM Light refreshments will be served. https://cof.church/ No services are being held through Addison Funeral Home.

John Mason Frye, Jr., Vice President of First Aid and Safety at Texas AED & Safety and resident of Spring, Texas passed away unexpectedly on May 7th, 2022 in his home at the age of 55. He lived at 6806 Enns Lane Spring, TX 77379. John is survived... View Obituary & Service Information

The family of John Mason Frye Jr created this Life Tributes page to make it easy to share your memories.

Send flowers to the Frye family.