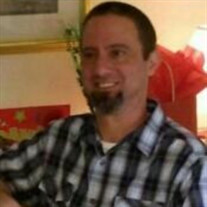 John Eric Heugatter passed away peacefully on Saturday, April 17, at the age of 49. John was one of the oldest survivors of cystic fibrosis, maintaining an active lifestyle despite many health challenges. John was born on February 16, 1972 to Les and Darlene Heugatter. He was baptized at Park Place Lutheran Church in Houston, with Richard and Bernice Heugatter serving as godparents. He was a lifelong Houstonian, attending Shady Acres Day School, Red Elementary, Johnston Junior High, and Alief Elsik High School, Class of 1991. John loved being around his family and enjoyed attending the yearly Heugatter Reunion and Strickler Reunion in Rosebud, Texas. John’s many friends were very important to him. Not being able to see his friends made this past year very hard. John inherited a love of cooking from his grandmother Bernice Heugatter. He cooked all his meals at home and often experimented with new recipes. His favorite jobs were in the food industry at Taco Bell and Long John Silver’s and he enjoyed his latest job at Bed Bath and Beyond. John’s love of animals started at an early age. His pets included ferrets, hamsters, white doves, rabbits, and one year for Easter he requested and got a snake. He loved his dogs, especially Dakota, and more recently Bailey. Heavy metal music was a big part of John’s growing up. He played guitar in a band called Cry Wolf! with his friend B.J. Jasso. He enjoyed listening to music and attending concerts with friends. He spent many summer hours at Astroworld and Westbury Square with his best buddy Kaynell Kirk. They loved going to Rosebud with Les and riding their bikes to Great-Grandma Lillie Strickler’s house. Mustangs were John’s passion. His 2001 silver Mustang GT was his pride and joy. He kept it in perfect condition, often with the help of friends like Mark Pierce and Darrin Klingbeil. He entered car shows, and won many trophies and plaques. Car shows to benefit the Cystic Fibrosis Foundation were held by the Mustang Club in John’s honor, raising thousands of dollars for research. He was a member of the Northside Mustang Car Club, Montgomery County Automotive Enthusiasts, and Silver Mustang Registry. The friends he made in the car club became his extended family. John will be deeply missed by his loving family and many friends. John is survived by his parents Les and Fran Heugatter and step-sister Jessica Noser, of Spring, Texas, and dear aunts, uncles, and cousins. He was preceded in death by his mother Darlene Cheney Heugatter, and his grandparents Richard and Bernice Heugatter, O.L and Dortha Cheney, and John and Gracie McLaughlin. A private graveside service will be held at Woodland Cemetery in Rosebud, Texas. Pastor Barry Sharp of First Lutheran Church of Rosebud will conduct the service. Honorary Pallbearers will be his friends: Mark and Cathi Pierce, Darrin Klingbeil, Tracy Templer, Brian “B.J.” Jasso, Shane Emmons, and Mike Juarez. His uncles: Mike Cheney, Wayne Heugatter, and Larry Heugatter. His cousins: Darrell Heugatter, Emily Heugatter, and Katherine Becnel. Memorial gifts in John’s honor may be made to the Cystic Fibrosis Foundation.

John Eric Heugatter passed away peacefully on Saturday, April 17, at the age of 49. John was one of the oldest survivors of cystic fibrosis, maintaining an active lifestyle despite many health challenges. John was born on February... View Obituary & Service Information

The family of John Eric Heugatter created this Life Tributes page to make it easy to share your memories.

Send flowers to the Heugatter family.