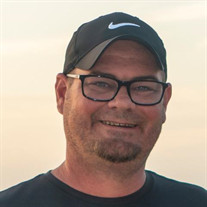 Jordan Thomas Lebsack, 44, of Spring, Texas, passed away on December 3, 2019, in The Woodlands, TX. Jordan was born April 18, 1975, in Ft. Smith, Arkansas, to Edwin Thomas and Linda Diane (Hays) Lebsack. As a result of his father’s employment, Jordan moved many times, living in Midland, TX, Williston, ND, Spring, TX, Tokyo, Japan, Paris, France, and Sugar Land, TX. He graduated from high school from Clements High School in Sugar Land in 1993 and attended college at UT-San Antonio. Jordan owned and operated Swig Lounge in Houston from 2007 to 2016. He met his wife Dana Myshell Bauer in 2007 and they were married on August 10, 2008, in Houston. Jordan cherished his friends and he had many. He kept in contact with those from his school days and beyond until he died. His personality was a joy to all with his wry sense of humor and wit. Jordan is survived by his wife Dana Lebsack and their dog/fur-baby Dexter, his parents Edwin Thomas and Linda Diane (Hays) Lebsack of Austin, TX, grandparents Alvin and Reuelene Hays of Red Oak, IA, brother Eliot, his wife Cindy, nieces Abigail and Sadie and nephews Evan and Flinn of Windham, NH, and brother Adam Lebsack of Ft. Collins, CO, along with numerous aunts, uncles and cousins on both sides of the family, and brother-in-law and sister-in-law Gene and Angela Bauer and niece Alyssa of San Antonio, TX. He was preceded in death by his grandparents Clarence and Esther Lebsack of Sterling, CO. Memorial contributions can be made in Jordan’s name to the American Liver Foundation (www.liverfoundation.org) or to a charity of the donor’s choice. The Addison family and staff would like to extend our deepest condolences to Jordan's family and friends.

The family of Jordan Lebsack created this Life Tributes page to make it easy to share your memories.

Jordan Thomas Lebsack, 44, of Spring, Texas, passed away on December...

Send flowers to the Lebsack family.