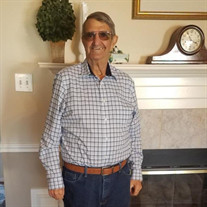 Joseph Martin Dukerich “Duke” age 76 died Tuesday July 28, 2020 at HCA Houston, North Cypress Hospital Emergency Room after a courageous battle with Pancreatic Cancer with complications. Born December 1, 1943 (the first day of deer hunting season) in the old Wayne Memorial Hospital Honesdale Pa. Wayne County to Mae Eva Olver Dukerich and Andrew B Dukerich. He graduated from Waymart High School, Waymart Pa in 1962 “Go Warriors”. He was drafted March 22, 1967 into 317th Engineer Battalion Army, Fort Rucker Alabama. After graduation he worked alongside his mother in several textile positions. After an honorable discharge he lived with his parents in Orange N.J. Joe began his construction career for M.J. Sheridan and Son, Orange N.J. until the company moved a division to Houston Texas. There it eventually became M.J. Sheridan of Texas. He next worked for L.E. Myers of Houston TX., North Houston Pole Line in the Underground Utility Division. After his retirement he worked for DIGCO Utility Construction – Quanta Services. The company was non-Union, but Duke was a member of the IBEW union. Local 66 in Pasadena Texas. Joe retired for a 2nd and final time in January 2017 having received several safety awards. Duke was an avid BBQ Team member that participated in many charitable events including the Houston Livestock Show and Rodeo. He was a Booster Band Volunteer for Cypress Falls H.S, a volunteer for his HOA Copper Grove and anything else his wife talked him into. Joe loved God, his family, friends, hunting, fishing, his truck and travel trailer, snowmobiling, and just being outdoors. He is preceded in death by his parents and older brother Ronald Dukerich, his nephew Christian Little and brother-in-law Leonard Boguski. He is survived by his two sisters Kathleen and husband Herbie Little and Sandra Boguski. He is also survived by his wife, love, and best friend of 44 years Paulette Soete Dukerich and his son Robert Joseph Dukerich. His sister-in-law’s and their spouses’: Deborah and John Milliron of Mechanicsburg Pa, Maryanne, and Patrick Good of West chester Pa. He has many nieces, nephews, great nieces’, and great nephews. He has many cousins that are like brothers and sisters to him that Joey (as they called him).

The family of Joseph Martin Dukerich created this Life Tributes page to make it easy to share your memories.

Send flowers to the Dukerich family.