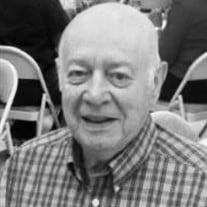 NO SERVICES ARE CURRENTLY BEING HELD THROUGH ADDISON FUNERAL HOME OR ADDISON FUNERAL HOME STAFF. PLEASE SEND ALL ARRANGEMENTS TO LONGMIRE ROAD CHURCH OF CHRIST. Joseph Warner Guidry, age 86, of Oak Ridge North, Texas passed away peacefully on the morning of May 20, 2022 at his home. He was born on February 16, 1936 in Maurice, Louisiana. He graduated from Abbeville High School and was a US Air Force Veteran. While in the Air Force, he learned skills to become an electronic technician and worked for the Federal Aviation Administration his entire career. Joe met his wife of 64 years, Norma Jean Russell Guidry, on a blind date while he was still in the Air Force. He and Norma married and spent the remainder of his Air Force years in Japan. When they returned to the US they lived in Fort Worth, Texas where their first child was born; Debra Lynn Guidry Powers. Later, his job took them to Lake Charles, Louisiana where their son, Joseph Russell Guidry was born. Their baby, Jill Denise Guidry Biernat was added to the family when they lived in Ball, Louisiana. They moved to the home on Paula Lane in Oak Ridge North in the summer of 1973. Joe and Norma loved God and family above all else. Joe was an elder at the Longmire Road Church for many years and Norma was right by his side serving the congregation. They visited brothers and sisters who were home bound or in the hospital, did work projects at their homes, brought meals and gave rides to many over the years. They were truly a team working for the Lord. Joe loved God, the Church and family in that order. He took his roll of elder very seriously and the years he served were some of the happiest of his life. He studied God's word for many hours to prepare Bible lessons and spent much time in prayer over the congregation. Joe loved to have family together for meals and was known for his gumbo and smoked ribs. He and Norma had fun times attending high school football games and dinners out with special friends from church. Joe is survived by the love of his life, Norma, and their children, Debra (Debbie) Powers, Joseph (Joe) Guidry and wife Andrea (Ande) and Jill Biernat and husband John; grandchildren, Joshua (Josh) Powers), Tyson and wife Hailee Powers, Cody and wife Erin Powers, Amber Guidry and Lyndsey Biernat; great-grandbabies, Emma Beth Powers and Brooklyn Hope Powers; sister, Doris Hebert and other nieces and nephews. Joe is preceded in death by his parents, Isidore and Eunice Guidry, beloved sister Gail Gaudet and his brother in law, who he considered a brother, Donald Hebert. Joe was the rock of our family and will be greatly missed. We take comfort in the absolute truth that he is with the God he served so faithfully. Joe truly "fought the good fight and finished the race" well. "I have fought the good fight, I have finished the race, I have kept the faith. Finally, there is laid up for me the crown of righteousness, which the Lord, the righteous Judge, will give to me on that Day, and not to me only but also to all who have loved His appearing." II Timothy 4:7-8

The family of Joseph Guidry created this Life Tributes page to make it easy to share your memories.

NO SERVICES ARE CURRENTLY BEING HELD THROUGH ADDISON FUNERAL...

Send flowers to the Guidry family.