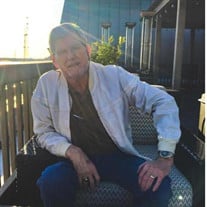 Joseph William Knight Jr ended his journey after a long illness on August 1, 2021 at home surrounded by love and music. Grandpa Joe was a beloved father, grandfather, brother, uncle, patriot who enjoyed cooking, the daily crossword puzzle, playing guitar, reading, watching FOX News and the Saturday cooking shows, listening to radio talk shows, fishing and watching ‘Da U’ Hurricanes play football. He was born August 16, 1944 in McAllen, Texas, the middle child of Joseph William Knight Sr and Mary Louise Knowles Knight. His father was a Lt Col in the Air Force, and the family left Texas when Joe was 3 months old for tours of duty to live in Japan, London and ultimately Miami, Florida, where Joe graduated from the University of Miami with a degree in Geophysics. He married and had two children, moving to New Orleans, LA, where he started his career in the oil industry with Amoco Production Company. He later moved to Shreveport, LA to work for Standard Oil and then to Houston to work for Randall Exploration. He became President of his own oil service companies, Spectrum Surveys, Inc and Custom Digital Inc. On a fateful, rainy night September 5, 1980 he met his soulmate, Jody Welborn. He was at his good friend Mike Simmons’ birthday party that had started as a lunch at a local restaurant and bar, progressing on to happy hour, where she appeared with a close girlfriend at another group. The celebratory group toasting the birthday boy with tequila shots, he dramatically threw his shot glass over his shoulder and hit her in the foot – the beginning of a 41 year love affair. They were married in January 1990 and blended their families with her two children and on to produce 8 grandchildren. Joe and Jody had many adventures, traveling to Key West, family reunions on Key Largo, sampling all the bars around the island of Cozumel, jeep excursions around Puerto Vallarta, deep sea fishing in Cabo San Lucas, riding the Orient Express to London, Paris and Venice, driving the Hana Highway in Maui, photographing the Grand Canyon, hiking Big Bend. He was their Chef Extraordinaire, acquiring a serious cookbook library and many cooking and baking implements. He loved to cook and she loved to eat. After a major stroke took him down in 2019 Jody Knightingale became his guardian angel, watching over him, challenging any procedure or medication that didn’t seem right, being his biggest cheerleader during physical therapy, slipping him an occasional glass of chardonnay. Many times he expressed he was the luckiest man in the world. Pandemic did them no favors, ending visitation and activities. Thank goodness for FaceTime, window visits and partitioned parlor visits to bring Dairy Queen Butterfinger Blizzards, Whataburger Cokes, homemade pineapple pie and peanut butter cookies and weekly driveby parades with balloons and pinwheels. Joe leaves behind his adoring wife Jody, his beautiful daughters Mary Elizabeth Knight Langraff (Bobby), Deanna Welborn Rojano (Bernardo), sons Michael Knight (Susan) whom he was so proud of being a Guard at the Tomb of the Unknown Soldier, Michael Welborn (fiancé Terry Gillory), and his wonderful and much beloved grandchildren, Dr. Malaika Adams (Oskar), Zak Adams (Jennifer), Garret Rojano (Sara), Teddy Moore III, Deven Rojano, Gage Welborn, Mauricia Welborn and Tristan Knight. Also to mourn his loss are his older sister Mary Lou Latini of Miami, his younger brother Scott Knight (Cindy), niece and nephew Marissa and Ian Knight of Houston, niece Mary Louise Brittain (JT) of Maryland, as well as many cousins, nieces, nephews and friends scattered across the US. The Desperado has Gone Home with the Armadillo. Joe’s wishes were to be cremated and his ashes scattered in Haleakalā volcano on Maui. A celebration of life will be held at a later date. Donations can be made to Wounded Warriors or any animal rescue of your choice. With much gratitude to Altus Hospice, to the patience and compassion of Sharon, who answered all my many questions to start this last step, to the efficient and comforting Christine, who oversaw all Joe’s needs, and the sweet Angela who daily took such good care of him, and to Roxie who appeared numerous times on call to make Joe’s transition easier.

The family of Joseph Knight created this Life Tributes page to make it easy to share your memories.

Send flowers to the Knight family.