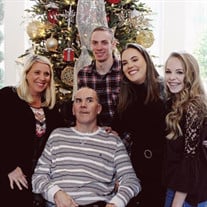 Julia Ruth Hamby (née Wehmeyer) Devoted wife of Nathan Shannon Hamby. Loving mother of Jonathan, Jordan and Jenna. Beloved daughter of John and Patricia Ann Wehmeyer, having been blessed by the Lord and prepared for Heaven, passed away peacefully surrounded by those who cherished her following a brief but spirited battle with cancer, Tuesday March 30, 2021. On September 16, 1973 Patricia Ann Wehmeyer celebrated her 28th birthday along with the joyous birth of her first daughter, Julia Ruth Wehmeyer. Julia was a very welcome arrival to her three older brothers and her younger sister and brother to follow. She was born in Phoenix, Arizona. A part of the St Vincent de Paul Church and School until moving to O’Fallon, Missouri in 1984. Raised a part of the St Barnabas Church, Assumption School and Fort Zumwalt High School families in O’Fallon. All along the way developing friendships and a love of St Louis Cardinal Baseball that would last a lifetime. As a child Julia was never without a baby doll. Born to be a mother. Never happier, never smiled bigger than when she was holding one of her babies. Any baby. To her older brothers she was a bossy, momma’s girl known as “Mississippi Momma” and was a “Mississippi Momma gettin’ mad” when she didn’t get her way. Learning to talk she called herself “Yaya” because she couldn’t say Julia, but from the beginning she was “our Sunshine, our only Sunshine.” Following high school she moved to Houston, Texas where she met and married Nathan Hamby. Her calling as wife and mother began. Nathan and Julia started their family in Houston where they became members of the Southwest Airlines family and settled in Las Vegas, Nevada. All along the way maintaining and developing new friendships that would last a lifetime. In February 2018, following a traumatic brain injury to Nathan, Julia strengthened her resolve as mother and wife, advocating and vowing to care for Nathan, her husband, all the days of her life. Shortly thereafter they returned to Houston to be surrounded by loved ones. Julia is survived by her husband Nathan, son Jonathan, and daughters Jordan and Jenna. Preceded in death by her father John Ray Wehmeyer and mother-in-law Linda Nell Hamby (née Robinson). Surviving parents include her mother Patricia Ann Wehmeyer and father-in-law Shannon O’Dell Hamby. Siblings include: Sister Jennifer (Chase) Denton, brothers Marc (Nikki), Christopher (Rachel), Thomas (Kelley) and John (Katie). Along with sister-in-laws Mary Gill (David), Geri Mills (Lou) and Cindy Neal (Jeff). Nieces and Nephews; Owen and Oliver Denton, Elizabeth (Ben), Margaret, John Micheal, Carolyn, Christine, Callie Sue, Sydney (John), Noah, Abigail, Nixon and Mavis Wehmeyer, Timmy, Ben, Alex and Caylie Carrillo, Ali Manning (Travis), Anna and J.C. Mills, Garret, Shane, Bailey, Alexa and Logan Gill, Brooke, Dawson and Graham Neal. Grandnieces and Grandnephews include Isla, Dorothy, Porter and Daniel. Julia’s children, her mother and siblings wish to thank the many family members, friends, co-workers, neighbors and so many loved ones who assisted, provided guidance and offered prayers for both Julia and Nathan before and during this loss, and for your continued prayers and thoughtfulness. We truly thank you and offer each of you the Peace of Christ. Gratefully, The Wehmeyer and Hamby Families.

The family of Julia Ruth Hamby created this Life Tributes page to make it easy to share your memories.

Send flowers to the Hamby family.