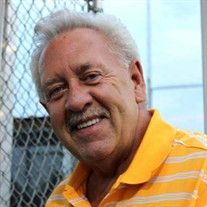 In lieu of flowers, Kenneth's family has requested that you make a donation in his honor to: St. Jude Children's Hospital https://www.stjude.org/donate/donate-to-st-jude.html?sc_icid=header-btn-donate-now or F.A.C.E.S https://facesautism.org On January 7th, 2022, Heaven gained another angel, Kenneth Stewart. Kenneth, affectionately known as “Stew”, “Kenny”, or “Papa”, passed away after a long, yet courageous battle with cancer. Ken was born in Hazzard, Kentucky on November 19th, though he spent his childhood living in Warren, Michigan with his parents, Jewel and Johnnie Stewart, and siblings Mike, Judy, Debbie, and Danny Stewart. During Ken’s early years, he became a member of the Freemasonry following in the footsteps of his father. He married his high-school sweetheart, Debbie, on August 2nd, 1974, beginning a lifetime of love and dedication. Shortly after their fifth anniversary, Ken and his family moved to Houston, Texas in pursuit of a new career. After exploring various avenues and even becoming a volunteer firefighter at Westlake Volunteer Fire Department, he then began his career at Pennzoil/Jiffy-Lube. Ken was transferred to Hendersonville, Tennessee for five years before transferring back to Houston, Texas where he enjoyed the remainder of his life surrounded by loving neighbors, family, and friends. After retiring from Pennzoil/Jiffy-Lube, Ken pursued his passion of being a business owner by operating multiple Texaco Express-Lube centers. After leaving the automotive industry and a brief retirement, Ken dove into the insurance field by opening his own insurance agency known as KRS Insurance. Ken fulfilled his dream of being a successful entrepreneur and businessman and later retired. Never one to sit still long, he then served as the Director of Facilities at an autism clinic, known as Spectrum of Hope, where he made each day brighter and better. Although Ken worked hard, he played even harder enjoying many hobbies including golfing, fishing, driving his 1970 Chevelle, playing horseshoes, and never shied away from a fierce water-volleyball game. Ken also loved hosting friends and family at his backyard bar commonly known as “Stew’s Bar & Grill”. Ken was a loving husband, father, and grandfather. He spent most of his adulthood in Spring, Texas where he enjoyed spending time with his children and grandchildren who were his greatest joy. He took extreme pride in the accomplishments of both his children and grandchildren never missing an opportunity to spend time together, showing them his love, and singing their praises. Ken was an extremely honest and loyal individual whose joy stemmed from giving and taking care of others. He was always filled with hope and saw the best in all people. He wholeheartedly believed in the people he loved and encouraged others around him. Ken never let the obstacles of life slow him down and he was a courageous fighter all the way until the end. Ken was preceded in death by his parents Jewel and Johnnie Stewart and his sister Judy Colley. He is survived by his loving wife Debbie Stewart, his daughter Dawn Stewart-Parrish and husband Ernest Parrish, his son Jeff Stewart, his granddaughter Alexis Parrish, and his grandson Justin Stewart. Ken is also survived by his siblings Mike Stewart, Debbie Cann, and Danny Stewart. Additionally, Ken loved his dachshund Brandi who looked after him through his last moments and was instantly at peace when she knew her dad was no longer in pain. Ken was loved by many and respected by all. He left a lasting impact on many hearts and will forever be missed, but never forgotten. Friends, family, and all the lives he touched are invited to celebrate Ken’s life at Addison Funeral Home in Spring, Texas on Monday, January 17th, 2022, from 2-4 p.m. The family requests in lieu of flowers, please consider a donation in Ken’s honor to St. Jude Children’s Research Hospital or the F.A.C.E.S. Autism Organization. We love you Papa, rest in eternal peace.

In lieu of flowers, Kenneth's family has requested that you make a donation in his honor to: St. Jude Children's Hospital https://www.stjude.org/donate/donate-to-st-jude.html?sc_icid=header-btn-donate-now or F.A.C.E.S https://facesautism.org On... View Obituary & Service Information

The family of Kenneth Stewart created this Life Tributes page to make it easy to share your memories.

In lieu of flowers, Kenneth&#39;s family has requested that you make...

Send flowers to the Stewart family.