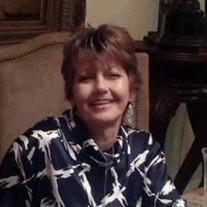 Linda Diane (Trahan) Moody, 65, was born in Houston, Texas to Curtis and Irene Penny. Linda live the majority of her life in Houston. Linda enjoyed her children and grandchildren most all. She was most referred to a “Silly granny” or “Silly grandma”, maybe even crazy at times. Linda would go out of her way to make sure her grandchildren were entertained, whether her health truly was up to it or not. She would dress up as a clown for birthday parties, ride roller coaster rides until she nearly puked, take them to bingo, snapchat sillies with them, act silly in Walmart, let them put make-up on her, lay in the bed and take selfies, basically, anything that would get a smile and a happy moment out of her little angels, she would be in, one hundred percent. She had so many that weren’t true grandchildren that called her “Grandma, or Granny”, and she treated them all the same. She took so much joy in loving all children. Other joys that Linda got out of life was music and dancing. She was taught to dance by her parents at a very young and She taught her children to dance at a young age at a venue on Lake Houston. A song would come on that would bring up a memory and she would grab whoever was close, a child of hers or a grandchild, and would want to dance in the hallway or kitchen. Her health may have not accommodated it in her last years of life, but she still had it in her and would suffer through the pain. Of love of family was Linda’s greatest attribute. She loved everyone without discretion, and unconditionally. If you needed a dime and she didn’t have it, she would go out and find you a quarter. She loved her Husband, Thomas, with all of her heart. The two of them took care of each other until her last days at home. Linda was a mother figure to nearly everyone, even her younger siblings. There just aren’t enough words to speak about her unique ability to love and want to take care of everyone around her. Preceded in death by Father; Curtis Penny, Mother; Irene Hardin, Brother; Roy Penny, Sister; Kimberly Penny, Son in-law; James Divins, Grandson; Mikey Divins. Survived by Husband; Thomas Moody. Children; Michelle Divins, Richard Trahan, Russell Zahradnik, Kim Ludwig. Daughter in-laws; Christy, Jessica, and Kimberly, Son in-law; David Ludwig, Grandchildren James Divins, Jr., Brittney Penny, Brandon Divins, Alyssa Trahan, Reagyn Trahan, Russell Zahradnik, Ross Zahradnik, Cody Porter, Reece Porter, Stoney Porter. Great Grandchildren Trey Divins, Jamie Divins, Cayden Divins, Raeli Divins, Liliana Divins, Asher Divins, Zoey Daniels, Eric Garcia, Jr, Skylah Adams, Emmanuel Garcia, Ransom Porter, Tinsley Porter, Aiden Porter, Brydon Lloyd, Kadie Lloyd, Kimberly Spurgen. Brothers, Rick Penny and Ronald Penny. Also survived by numerous nieces, nephews, friends and other special relatives. Pall Bearers; Russell Zahradnik, Ross Zahradnik, James Divins, Jr., Ronald Penny, Jr., Stoney Porter, Eric Garcia. Honorary Pall Bearers; Brandon Divins, Cody Porter

Linda Diane (Trahan) Moody, 65, was born in Houston, Texas to Curtis and Irene Penny. Linda live the majority of her life in Houston. Linda enjoyed her children and grandchildren most all. She was most referred to a &#8220;Silly granny&#8221;... View Obituary & Service Information

The family of Linda Diane Trahan Moody created this Life Tributes page to make it easy to share your memories.

Send flowers to the Moody family.