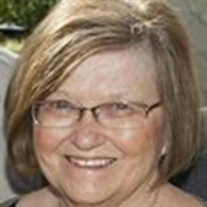 Lois M. Smith, 84, passed peacefully on Sunday, April 5, 2020. Her children were at her side. Lois was born on October 8, 1935, in Long Beach, California, to Henry and Muriel Bastian. During her youth, the family moved to Beaverton, Oregon, where Lois grew up. After graduating from Beaverton High School, Lois honorably served in the United States Navy, 1954-1957. It was during her service that she met Glenn Smith. They married March 1, 1957, in Norfolk, Virginia. Lois was a loving wife and homemaker as her husband’s studies and career took them to Louisiana, Arkansas, Tennessee, Mississippi and again to Tennessee. Their last transfer carried them to Spring, Texas, where Lois lived for over thirty years. Lois enjoyed traveling, reading, gardening, spending time with her family and she treasured her visits to family in the Pacific Northwest. Lois was preceded in death by her husband, Glenn Smith on June 13, 2017; by her father, Henry F. Bastian, her mother Muriel Bastian nee Bryon, her brother Robert Bastian and his wife Mary, and her grandson, Justin Dominic Smith. Survivors include her sister Anne Bastian of Bellevue, WA; her children, Michael Smith (Marita), Jeffery Smith (Marilyn), Monica Ronczy (George); her seven grandchildren, Hilaire Smith, Brigitte Smith (Nathan Rolfe), Christopher Mucci (Jennifer), James Stanolevich, Jonathan Stanolevich, Robin Ronczy, and Perry Holt-Ronczy (Thomas), her 16 great-grandchildren Simon, Cecilia and Lily Playa, Cayden and Mason Rolfe, Kate, Evelyn, Anna and Andrew Mucci, Aiden and Evan Stanolevich and Sean, Joshua, Madilyn, Christian and Kaitlyn Stanolevich, and many dear nieces and nephews, family and friends. She is predeceased by her great-grandson Dylan Stanolevich. Due to virus concerns, funeral arrangements are limited to immediate family. The Addison family and staff extends their condolences to the Smith Family

Lois M. Smith, 84, passed peacefully on Sunday, April 5, 2020. Her children were at her side. Lois was born on October 8, 1935, in Long Beach, California, to Henry and Muriel Bastian. During her youth, the family moved to Beaverton, Oregon,... View Obituary & Service Information

The family of Lois Smith created this Life Tributes page to make it easy to share your memories.

Send flowers to the Smith family.