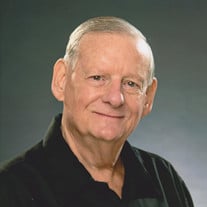 Loyd Alan Overcash, age 73, passed away in his home May 8, 2022 after a courageous battle with cancer. Loyd was born on August 8, 1948 in Houston, Texas to Loyd Columbus Overcash and Frances Vernet Newsom, where he remained a lifelong, loyal resident. After graduation from Klein High School in 1966, Loyd became a proud employee of Braniff Airlines until 1972, when he started his own company, "Loyd Photography," which offered a myriad of services; portraits, weddings, sports photography and video, high school dance photography, dance studio photography and video, business photos, passport photos and video taping "street news" for the local (and sometimes national) TV stations. He was known in the industry for being a quality man, who produced quality photos and videos, for a reasonable southern man's fee. In April 1983, Loyd married the love of his life, Patty Drinkard Neary. They spent their days cruising and attending country music concerts, where he was often hired to photograph the performers. Many loving memories were made in their years together. Loyd's two favorite hobbies included operating a ham radio and talking to other ham radio operators around the world, making many friends along the way, and astrophotography. He was an amazing astrophotographer who enjoyed teaching other astronomers the skill of producing impressive images and the artistry behind finding the beauty amongst the stars. He mentored as often as he could and never swayed from giving a good lesson and sharing the passion with others. His amazing artistry and images were published many times throughout his life and he was proud of his beautiful work. Loyd will always be remembered as a loving husband, brother, father and mentor. Although his final days were tough and he will be forever missed, Loyd was ready to go Home with Jesus. He is preceded in death by his father, Loyd Overcash and his mother, Frances Newsom. He is survived by his wife Patty Overcash, sister Jo Ann Allen, son Aaron Loyd Overcash, grandson Brantlee Lane Overcash, step-daughter Angela Kay Neary Hughes and her daughter Annabelle Jane Hughes. In lieu of flowers, please consider making a donation in honor of Loyd to the American Cancer Society. https://www.fightcancer.org/

Loyd Alan Overcash, age 73, passed away in his home May 8, 2022 after a courageous battle with cancer. Loyd was born on August 8, 1948 in Houston, Texas to Loyd Columbus Overcash and Frances Vernet Newsom, where he remained a lifelong, loyal... View Obituary & Service Information

The family of Loyd A Overcash created this Life Tributes page to make it easy to share your memories.

Send flowers to the Overcash family.