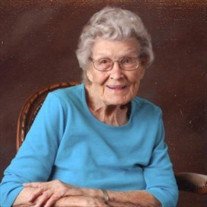 Madline Burk Reaves, born on November 26, 1920, died in Christ at age 99 on July 31, 2020. She was born in Calvert, Texas, the second daughter of Jones Martin Burk and LaVada Willingham Burk. As a very young child, she gave herself a nickname, Kid Burk, because she thought it sounded like an outlaw’s name. To this day, she is known to many as Kid or Aunt Kid. Her family moved to Waco in a covered wagon, where she graduated from LaVega High School. Ready for adventure, Madline moved to San Diego for a while, then returned to Waco to be a nurse’s aide in a hospital, and later helped build airplanes during World War II. While working as a receptionist in a doctor’s office in Austin, she met and married Robert Reaves. Their daughter, Suzanne, was born in Austin, and the family moved to Houston in 1952. Rob was an electrical contractor, and Madline was a homemaker. She was active in her church, led a Brownie troop, and was the most fun mom on the block. She had always longed to be a nurse, and when Suzanne started college, she enrolled in college, too. She graduated from Herman School of Nursing in 1973, at the age of 52. Madline worked as a nurse in several settings, finding her passion in Home Health nursing. To the delight of her grandchildren, she lived in a log cabin in Ledbetter, TX. When she retired in 1987, she kept up a long-standing family tradition –becoming Granny-in-residence, helping to raise Beth and Alex. Madline moved to Brookdale Willowbrook Place in 2008, where she spent her final 12 years. She was beloved by the staff and her family. Her grandson called her a “tough old broad”, a moniker that she loved, adopted, and lived up to. She leaves a legacy of love and service to others, an example of a life well-lived. She is survived by her daughter, her two grandchildren, her great-granddaughter, Hazel Clementine, and a niece and four nephews. Madline will be inurned in the columbarium at her church, Northwoods Presbyterian Church. Her memorial service will be scheduled when it is safe to gather, after the pandemic. Memorial gifts may be sent to: Presbyterian Children’s Homes and Services P. O. Box 140888 Austin, TX 78714-9981 www.pchas.org Northwoods Presbyterian Church Endowment Fund 3320 Cypress Creek Parkway Houston, TX 77068 www.northwoods.org

Madline Burk Reaves, born on November 26, 1920, died in Christ at age 99 on July 31, 2020. She was born in Calvert, Texas, the second daughter of Jones Martin Burk and LaVada Willingham Burk. As a very young child, she gave herself a nickname,... View Obituary & Service Information

The family of Madline Burk Reaves created this Life Tributes page to make it easy to share your memories.

Send flowers to the Reaves family.